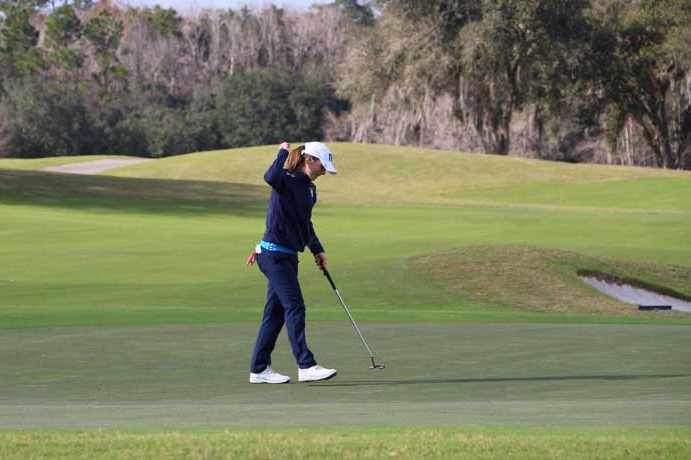 Paced by another top-10 finish by Mychael O’Berry, Auburn’s women’s golf team finished in fifth place at the Gamecock Intercollegiate on Wednesday.

As a team, the Auburn women’s golf team shot 879 to finish 15 shots behind Duke which finished at even par 864. Wake Forest was second at 867 and host South Carolina was third at 870.

Tide freshman Benedetta Moresco shot 74 in the final round to finish tied for third overall at 2-under-par 214 against a stacked field. Duke’s Erica Shepherd was the individual winner at 7-under par 209 (69-70-70). It was the second straight top-five finish for the Crimson Tide.

“We got off to another slow start, which has to change, but we were pretty solid after that,” he said. “This was a very challenging field of teams on a good golf course and that tends to separate teams pretty fast, so we have some work to do. We have a talented team, but we have to stop making silly mistakes, eliminate our mental errors and clean up our short game.”

After posting the best finish of his collegiate career at the University of South Alabama’s first event of the spring season, Yannick Schütz was named the Sun Belt Conference Men’s Golfer of the Week.  The league office made the announcement on Wednesday.

Schütz recorded a career-low 7-under par 209 54-hole total to tie for third place in a field of 87 at the Mobile Bay Intercollegiate at the Magnolia Grove Crossings Golf Course.  The redshirt senior from Friolzheim, Germany, shot under par in all three rounds highlighted by a 5-under-par 67 on the opening day to match the lowest 18-hole score of his career.

It was the third time in four events during the 2020-21 season that Schütz has placed in the top 10 individually to end up as Alabama South’s highest finisher in the field. It  was the 18th top-20 result of his career.

South Alabama’s next tournament is March 15 at Auburn’s Tiger Invitational.