Hats Off to Wallaroo Hat Company 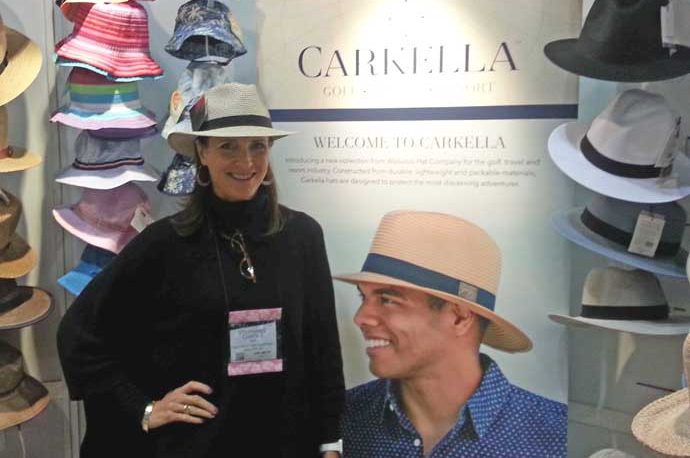 Company Named for the Road in Australia

Stephanie Carter didn’t start out to be a mogul of headwear, it’s just where her career path took her. Carter is the president of the Wallaroo Hat Company, an enterprise she came to quite by accident 20 years ago on a visit to Australia.

“My husband was Australian and I was on his parent’s farm and saw his mother gardening in one of the hats,” Carter recalled while manning a booth at the PGA Merchandise Show in Orlando.

“I brought one of the hats back to the United States and everyone who saw it fell in love with it. People in Australia love to wear hats and I recognized there was a huge need in the United States for some protective headwear that also looks attractive.”

And thus, the idea was born. Carter started working with a designer in Australia and came up with the concept and the Wallaroo Hat Company name.

Why the name Wallaroo Hat Company, though?

“It’s the name of the road where my husband grew up on, and we just started importing the hats. It just sort of took off,” Carter said.

Some 20 years later and Wallaroo Hat Company is going strong.

We now have a pretty substantial following,” she said. “We have about 4,000 retail accounts across the United States. We sell on Amazon. We have Wallaroohats.com, where we sell our line.”

There’s a separate website for another line of Wallaroo hats – Carkella by Wallaroo.

With an emphasis on skin care and style, Wallaroo Hat Company continues to grow. Carter said sales were up 15 percent in 2019. The unknown for 2020 is when the coronavirus lockdown will subside.

“I feel like hats are definitely on trend right now,” she said. “I think our combination of emphasis on skin care and fashion really speak to the people. That has really been a huge bonus for us in terms of us as a company.”

Carter’s Career Started in the Law

Carter didn’t dream she would end up owning a hat company. She began her professional career as an attorney specializing in family law and working with indigent families.

“I frankly thought I would probably be doing that for the rest of my life,” she said. “And then I just sort of happened into this hat business and the history of the company just sort of wrote itself, which has been really fun. It’s amazing to travel around the world and no matter where I go, I see my hats.”

Like last summer in Europe, where Carter was hiking and ran into some other hikers wearing Wallaroo hats.

“I was like, ‘That’s my hat.’ It was fun,” she said. “They were Americans who were traveling abroad. It’s been an interesting journey for sure.”

The Wallaroo Hat Company features men’s, women’s and children’s lines. Golf is just a small part of the company’s target audience, but it definitely has become a focal point given its emphasis on skin care.

Carter is proud that her company was one of the first to market hats that are UPF-rated. Most are rated either UPF 30, which blocks up to 96 percent of the sun’s damaging ultraviolet rays, or UPF 50, which blocks 97.5 percent – the highest percentage possible.

Carter admits golf was a spinoff from her original lines.

“We weren’t necessarily in golf when we started, but it was just kind of a logical evolution to come into golf because again 50 percent of the golf market is women,” she said. “There’s a huge market for that. Then we started evolving in a men’s line as well. So now we do a huge men’s line. We’re starting to gain traction in the hats for men as well.”

In addition to being stylish and offering maximum sun protection, Carter is proud that her collection is travel-friendly – most of the line can be packed in suitcases or carry-on luggage and not be damaged.

“It’s super packable, lightweight and designed to be squashed up and put in somebody’s golf bag or in somebody’s purse,” she said. “You can put it in your travel carrier so you’re not always having to put it in the overhead department. That makes it hard to travel. People are always having to wear their hat. This makes it a little easier or accessible when they’re traveling.”

Even 20 years after starting the business, Carter still smiles when she can persuade somebody to try one of her hats.

“I love getting somebody in a hat – like you wear the hat, the hat doesn’t wear you,” she said, smiling. “And men are like, ‘I’ve never looked good in a hat.’ They try on a Wallaroo hat and they’re amazed at how good they look. So there’s always something kinda fun about that, just knowing that you’re transitioning people from non-hat wearers into hat wearers.”