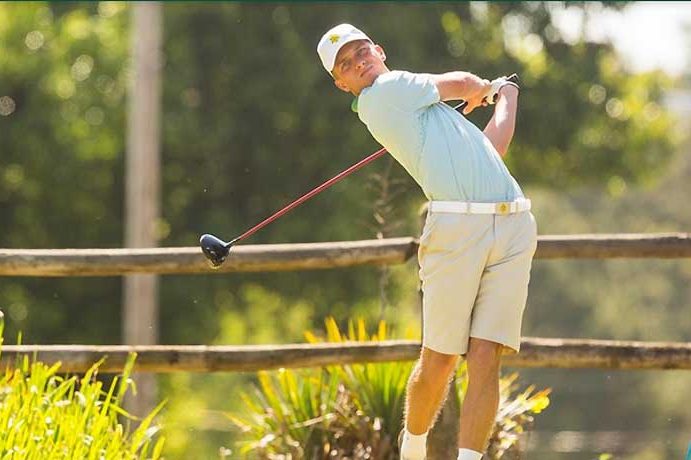 for Austin Gean, his senior year at Arkansas Tech was sailing right along, on track to reach a crescendo in mid-May.

The former Central-Florence High School standout golfer had his eye on another NCAA Division II tournament appearance, and he hoped to lead the Wonder Boys to their first national title.

Then, the two-time Ping Division II All-American said the plan was to turn professional and hit the developmental tours to get his first experience playing at the next level.

That was before everything came to a standstill.

Fortunately for Gean, the NCAA quickly offered players on the Division II level of which Arkansas Tech is a member, the opportunity for seniors to extend their eligibility by a year. It’s an offer Gean couldn’t refuse.

He’ll return to Arkansas Tech this fall and play another year of college golf.

When the season ended, the Wonder Boys were ranked sixth nationally in Division II, and Gean was confident they had a chance to challenge for the national title.

“We were excited to see how far we could go, so it’s kind of like unfinished business,” said Gean, who started his career at Montevallo University before transferring. “We had a good chance to win it.”

With a strong team returning and a summer schedule that is in limbo, returning for another year of school seemed like a good idea.

“I was going to turn pro right after the season because that is when I usually am playing my best golf,” he said.

“But going back is going to be huge. I was scheduled to graduate in the summer. Now, I’ll go back in the fall and take some classes.”

Gean began his college career as a marketing/management major but changed to interdisciplinary studies.

Gean has gradually been making some swing changes he hopes will prepare him for professional golf — he’s changing from a right-to-left ball flight to one that is straight or slightly left-to-right. Scott Hassee, formerly of Timberline Golf Club in Calera, remains his teacher.

“He’s the only coach that has ever worked with me,” Gean said. “He knows what is going on with my swing.”

In addition to his swing change, Gean has tried to improve his ball-striking in an effort to produce more greens-in-regulation.

“I would always hit around 9 or 10 greens and get around with my short game,” he said. “I could score but never got super low because I wasn’t hitting enough greens. I improved to around 13 or 14 greens in regulation the last two years, and the last two weeks I’ve been hitting about 16 greens. It’s just about giving myself more chances to go low.”

The improved ball-striking has paid off. In the past two years Gean has recorded two rounds of 64 and several scores of 65 and 66 in tournament play.

“That wasn’t happening before,” he said.

The ability to shoot low scores is imperative when he does turn professional. Had he turned pro this summer, Gean was going to play on the All Pro Tour, a developmental tour that has events in Mississippi, Louisiana, Arkansas, Oklahoma, Texas and Kansas.

“It will be a completely different experience,” Gean said of turning pro. “It’s eye-opening how many guys out there can go low, but I think right now I could compete and finish in the top 15 of 20. The winners on the APT are shooting 24 and 25 under. I’m not quite there yet.

“That’s why I think going back to school will be huge,” he continued. “I’ll have great competition every day from my teammates. You have to be on top of your game every day. It will give me another year to improve and get ready to turn pro.”