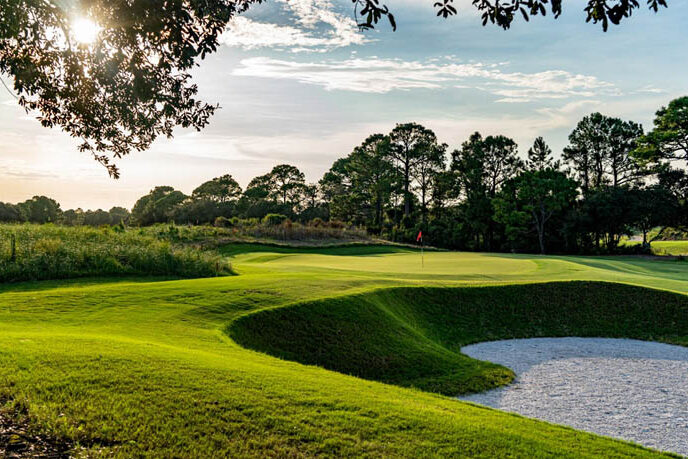 Seaside golf is as good as it gets

GULF SHORES – When people in Alabama talk about heading to L.A. for the weekend or for the week, they usually don’t mean the City of Angels on the Left Coast.Instead, the initials L.A. stand for one thing – Lower Alabama.

More often than not, heading to L.A. means a trip to the pristine beaches of the Gulf of Mexico – specifically Gulf Shores and/or Orange Beach.

Packing for a family or friends visit to Gulf Shores/Orange Beach requires swimwear, sunscreen, flip flops and an extra dose of a Jimmy Buffet and his cohorts’ playlist.

However, not to be overlooked when loading up for a beach trip is making space for golf clubs. In fact, it should be a requirement. That’s how good the golf is along Alabama’s Gulf Coast.

There’s no shortage of outstanding golf courses along Alabama’s Gulf Coast, which stretched for 32 miles from the Florida state line to the Mississippi state line.

Here are four must-play facilities in the Gulf Shores/Orange Beach area. All are open for public play:

Kiva Dunes Golf and Beach Resort: Widely considered the top course along Alabama’s Gulf Coast and annually among the state’s top five, this is a one-stop shopping for staying and playing. The Jerry Pate design always ranks among the top five courses in Alabama and it doesn’t disappoint. Before dabbling in design, Pate was already well-known in Alabama for his exploits as a player – first at the University of Alabama and later on the PGA Tour that included a win at the 1976 U.S. Open.

Now, he’s equally known for his design work. Several other of Alabama’s state courses on Pate’s resume are Limestone Springs in Oneonta, Ol’ Colony in Tuscaloosa, and Timberline in Calera.

With a setting just 200 yards or so from the Gulf of Mexico, Kiva Dunes has a links feel. It has five sets of tees stretching from 5,006 yards (red tees) to 7,122 yards (gold tees). Kiva Dunes has hosted a variety of tournaments, including the Alabama Open and Alabama Men’s State Amateur.

One of Pate’s trademarks is to provide players with a short par 4 on each side. At Kiva Dunes he offers three such holes – the fourth hole is a quaint 262-yard par 4 (white tees); the 10th hole plays to 308 yards; and the 11th plays 307 yards.

Catch Kiva Dunes on a benign day and there is a good score waiting for you. Play it in the wind and it becomes a survival-of-the-fittest test.

Located on the Fort Morgan peninsula of Gulf Shores, Kiva Dunes is a true stay-and-play facility with vacation rentals, four pools, two restaurants and more than 3,000 feet of beachfront.

Peninsula Golf and Racquet Club: With three distinct nine-hole layouts, Peninsula definitely is a must-play for any visit to Gulf Shores/Orange Beach.

Designed by Earl Stone and opened in 1995, the Marsh, Lakes and Cypress nines challenge players with different styles of play.

Water is in play on nearly every hole of the appropriately named Lakes Course, while water and wetlands are the primary features of the Marsh Course. Tight fairways and bunkers make the Cypress Course a challenge.

Gulf Shores Golf Club is the oldest course Gulf Shores, and Morrish’s renovations lengthened the course by 300 yards. It now plays 6,812 yards from the tips and is par-71.

Featuring Mini Verde Bermuda grass greens, the Gulf Shores Golf Club offers a variety of sharp doglegs and numerous water hazards. Dan Dorrough, the course superintendent, has done a nice job since arriving in 2021 to return the course to pre-Hurricane Sally condition. After previously working at Kiva Dunes and Peninsula in an assistant capacity, Dorrough has found a home as the head superintendent and is familiar with the area’s golf history.

Craft Farms Golf Club: If you are into Arnold Palmer designs, then Craft Farms should definitely be on your list to play. A facility with 45 holes, including the only two Palmer designs in Alabama, Craft Farms is Gulf Shore’s original golf resort.

The original Palmer design is Cotton Creek, opened in 1987 and is appropriately named because Cotton Creek does indeed meander throughout the property. With large, undulating resort-style greens, Cotton Creek can play as long as 7,127 yards. But with five sets of tees, there’s a tee box for every skill level.

Where to stay in Gulf Shores/Orange Beach

Alabama’s Gulf Coast is jam-packed with condos, so there is no shortage of availability. But one place that is a little more secluded is the revamped Gulf Shores State Park Lodge set among the sand dunes on the beach.

This 350-room Hilton hotel overlooks the Gulf of Mexico and features a pool, the Perch restaurant and a patio bar. The best thing is that there are no nearby condos and access to the 6,150-acre state park is just across the street. The Hugh S. Banyon Backcountry Trail is popular for hikers, cyclists and joggers.

Where to eat in Gulf Shores/Orange Beach

The Gulf Coast is known for its fresh seafood, and dining options in and around Gulf Shores/Orange Beach are plentiful. One of the most popular spots for food and fun is LuLu’s, which has something for just about everyone, including live music, gift shop, arcade and other amenities to keep the kids occupied while waiting on a table. Owner Lucy Buffett is the sister of acclaimed singer/songwriter Jimmy Buffett.

Two restaurants a little off the beaten path are Big Fish and Sassy Bass Cookout Tiki Bar. Both offer some of the freshest seafood on the coast, but their menus are diverse and have a variety of other dishes to satisfy just about anyone’s palate.

Island Wings, which bakes all of its wings, is a go-to spot to watch sporting events and imbibe a cold beer.

What else to do

The Flora-Bama Lounge is one of the best-known dive bars in the Southeast. It straddles the Florida-Alabama line and over the years has become a sprawling entertainment venue that features a restaurant. It’s another of Gulf Shores’ iconic must-visit entities and a perfect spot to wind down after a day on the course or beach.

It’s no secret that Gulf Coast sunsets are spectacular. A nice way to relax at the end of the day is on a sunset cruise aboard the 53-foot open-ocean catamaran Sail Wild Hearts. If you’re lucky, you might even be able to watch dolphins play alongside the boat.

Gulf Shores/Orange Beach features numerous miniature golf courses, but one of the best is the glow-in-the-dark Jurassic dinosaur adventure. Aside from the cool prehistoric setting and black-light lit indoor space, Jurassic golf is a good way to escape the heat or the rain – and yes, it does get hot and it does rain in Gulf Shores/Orange Beach.

For more information about the area, go to GulfShores.com or OrangeBeach.com