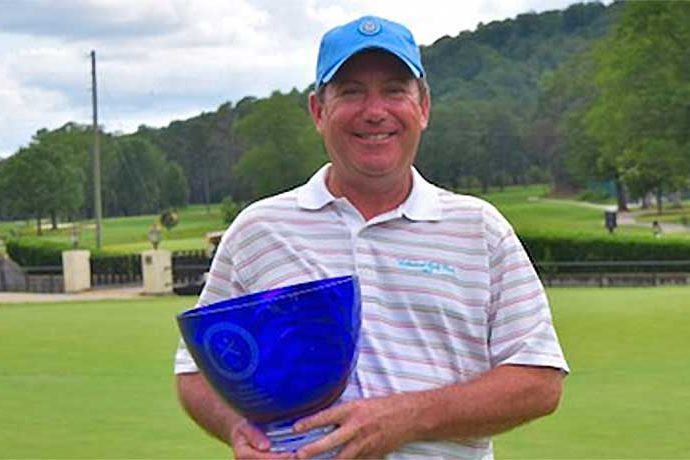 His focus: eating right and working on his short game

As the US Senior Amateur nears, the anticipation is building for Fairhope’s Robert Nelson.

“Heck yeah. This is my first USGA event in probably 11 years,” he said. “I qualified for the PubLinks in 2010, but I haven’t done a whole lot since then. So I’m excited. There’s going to be a lot of good, good, good players (in the tournament). It will be interesting to see what I can do in the big fish bowl.”

Nelson put together a bogey-free round of 5-under-par 67 at Willow Point Golf Club in Alexander City on July 27 to claim his berth in the tournament. Nelson carded five birdies and avoiding any and all trouble in the 18-hole qualifying tournament.

Nelson, 60, is now in the middle of preparing for the US Senior Amateur to be played Aug. 28 through Sept. 2 at the Country Club of Detroit in Grosse Pointe Farms, Michigan. He won the qualifier by three shots over Chris Hall of Marietta, Georgia., who won a playoff with John Fisher of Opelika and David Hancock of Greenville to get into the field. Fisher is the first alternate and Hancock the second alternate from the 51-player qualifying field.

Qualifying was just the start for this US Senior Amateur Competitor

“As in any qualifier for a USGA event, that’s arguably the hardest step in the whole thing because there are so few spots available,” Nelson said of his performance. “In this case there were just two spots and there were 51 players. (In) one 18-hole round, a couple of three putts and an errant shot and you’re done. You just can’t make mistakes. Fortunately, I didn’t; five birdies and no bogeys. I didn’t have any hiccups and that was a big part of my round.

With the US Senior Amateur fast approaching, Nelson said he’ll spend the rest of the month preparing.

“Even though I’m playing some pretty good golf, I still see some things I need to improve,” he said. “That’s got me motivated right now. I need to tighten up on a few things in my swing and shore up a few things in my putting, particularly. The next three weeks I’m going to spend a lot of time putting. I’m missing putts that normally I’m better at and I don’t know if my speed is off or what. Maybe that’s because the speed of the greens changes from course to course. … My alignment seems to be off a little bit and I need to tighten that up.

He has done some research on what he’ll face when he arrives in Michigan.

“I’ll need to work on short game stuff up there because it appears that your first cut around the green is short, but then you go into grass that we’re not familiar with down here. It won’t do me any good to practice chipping out of Bermuda rough (here), when I’m going to be playing out of a whole different grass, for sure.”

Taking care of himself physically is as big a key as his swing, Nelson said. He plans to arrive on Aug. 25 for a reception that night, then spend a couple of days working more on his putting and chipping than other aspects of his game.

“It hit me the other day that qualifying is Step 1 of 10, because you’ve got two 18-hole medal play matches Saturday and Sunday, then you go into bracketed match play on Monday,” Nelson said. “If you keep advancing, you play two rounds for the next three days and then you have the finals the final day. If you keep going, that’s a lot of golf. I’ve got to somehow keep some fuel in the tank. So I’m not going to go burn myself out in practice rounds when the majority of the stuff I need to do is — I’m not going to worry about tee to green, I’ll just work on short game stuff mostly. There’s a lot of golf coming up and I’m going to have to eat right and rest and hopefully keep advancing. I’ve got to keep my energy level up.”

Tommy Hicks is a frequent contributor to algolfnews.stagingyour.site.