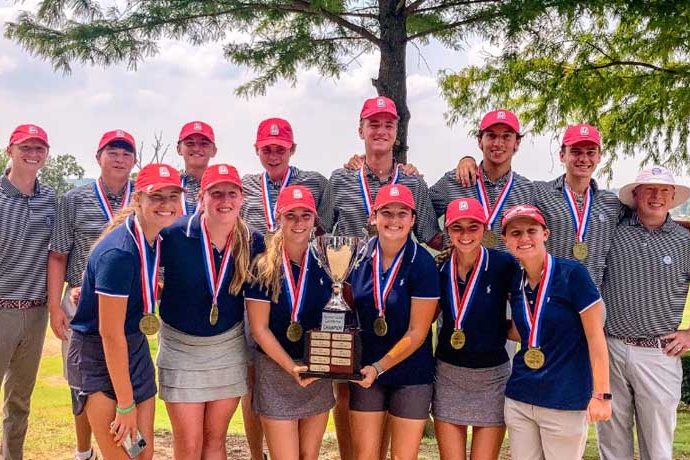 The matches are a Ryder Cup-style competition featuring four-ball, foursomes and singles matches.

Standing all square through hole No. 17, Taylor Trible of Birmingham poured a final putt in on No. 18 to win her singles match and clinch the team title.

Harrison Sims of Homewood birdied his final three holes to halve the match, solidifying the victory.

“I am so thankful I had the opportunity to play with this amazing team and bring the cup home to Alabama once again,” Thompson said. “We had the best time rooting each other on and getting to play together in some really fun matches.”

Twelve Alabama junior players were selected for the 2021 Southern Junior Cup team. The Junior Boys and Junior Girls teams are comprised of six players each, recruited through the AGA team selection process.

On September 20 at Shoal Creek Club, the Alabama Golf Association staff will participate in the “100-Hole Hike” to raise money and awareness for Youth on Course Alabama. The AGA will walk and play 100 holes from sunup to sundown to continue its growth of the game in Alabama. Every dollar donated goes directly toward supporting Youth on Course Alabama. A donation of just $100 ensures that 20 youth golfers will get the chance to play a round of golf in 2021 and beyond.

The Alabama Golf Association and Youth on Course have partnered to open the door for more than 3,500 golfers in Alabama, ages 6-18, to play rounds of golf for $5 or less at participating facilities. The core purpose of Youth on Course is to provide life-changing opportunities through golf.

Members can play thousands of golf courses worldwide for $5 or less. For participating facilities in Alabama, the AGA recognizes that the $5 fee may not adequately cover the expense of the round so each course is subsidized at a negotiated rate for the remainder of the green fee.

The Alabama Golf Association has launched the state’s first and only golf-themed license plate. The AGA has one year to secure 1,000 pre-commitments to officially launch the Driving Fore the Game license plate in 2022.

Both individuals and groups can pre-commit and secure a license plate by visiting the Motor Vehicle Title Registration and Insurance Portal.

Executive Director of the Alabama Golf Association, Andy Priest, spearheaded this process to drive further impact beyond the golf course.

“The Alabama Golf Association is proud to serve the state through its fundraising arm, the Alabama Golf Foundation,” Priest says. “This license plate has the power to create and establish greater scholarship opportunity, unlock affordable access to rounds of golf for the youth and more. I’m proud to see this long-time goal on its way to becoming a reality. Now, we just need 1,000 people to join us in our mission to impact lives and grow the game.”

PrevPrevious ArticleThe 121st US Amateur: What to Know
Next ArticleFairhope’s Robert Nelson preparing for US Senior AmateurNext