Mobile golfer beats odds, makes 2 aces in one round 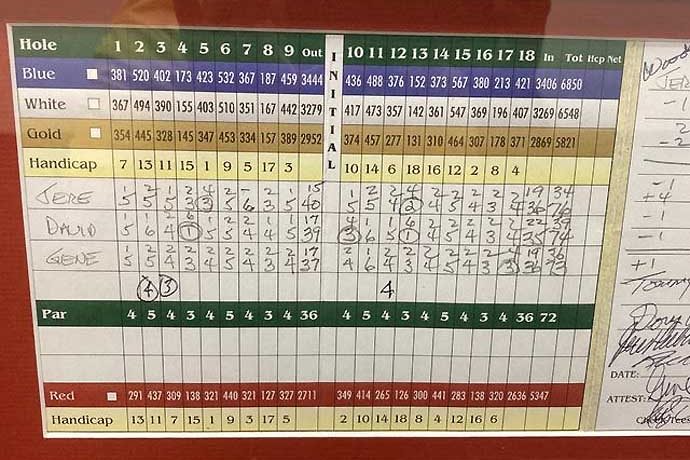 Oods are 67 million to 1 against

David Deeds had quite the day at the Azalea City Golf Course near Mobile recently.

As a quarterly dues-playing member of the popular city-owned course near the campus of the University of South Alabama, Deeds plays as much as possible.

His course knowledge, combined with the skill and experience of his 76 years, allowed Deeds to defy the odds by making 2 aces during one round at his home course.

On Aug. 2, Deeds, using his Ping 710 8-iron and a bright yellow Titleist ProV1X golf ball, holed his tee shot on the 135-yard fourth hole then repeated the accomplishment on the 138-yard 13th hole.

The odds of such a feat, according to a Google search, are 67 million to 1.

“We had a couple of fellas, my playing partners [Gene Drury and Jere Hilbern], who were already on the green [with their tee shots] — we play greenies, closest to the pin, stuff like that,” Deeds told the weekly newspaper Lagniappe of his first ace that day.

“They were both on the green and fairly close and I hit one and I saw that it got inside them and I reached down to get my tee and when I looked up the ball disappeared in the hole.”

Nine holes later when the group reached No. 13, they were still talking about Deeds’ hole-in-one on No. 4. Sure enough, he did it again.

“I hit the ball and it was going right at the pin and I said I think that ball went over lthe green] because I saw it bounce and then I didn’t see it,” Deeds said. “It’s kind of hid up there. We got up to the green and one of the fellas walked to the back of the green and he said, ‘I don’t see it back here.’ I was walking toward the pin and I looked in the hole and there it was; I reached in the hole and picked it out.”

He used the same ball for 2 aces in one round

“I got it put away after that,” he said.

He said he isn’t sure why he continued to play with the same ball after the first hole-in-one.

“I didn’t know what to think,” he said of the feat. “I was kind of in a daze. I said, that’s a pretty good ball, I need to put that away (after the second ace). … I got a little shook on the front after No. 4, but then on the back I parred all the way in [after the ace] and even had a birdie [at No. 10]. It’s hard to believe that it happened to me, of all people.”

Deeds retired 11 years ago after 41 years from Budweiser and plays golf four times a week on average.

“It’s me and golf and home and that’s it,” he said. “I don’t have a wife. I have a daughter and she’s married with grandkids, so it’s me and my dogs [Zebbie and Pris], so I play a lot of golf.”

Deeds has been playing golf for 64 years and these were the ninth and 10th aces of his career. It was the third time he has aced No. 4 at Azalea City.

By the way, he finished the round with a score of 74, shooting better than his age.

The latest are his 9th and 10th aces

“It’s a little par 3 and probably 130 yards long. It’s easy to knock it over the green and this one hit and rolled on and disappeared on the green. They take your ball and they send it off and have it mounted and sent back. I never saw that ball again. I never did. So, I didn’t do that anymore,” Deeds said.

Golf isn’t just a game for Deeds, it’s a way to hang out with his friends.

“Being with your buddies is the main thing,” he said. “I do it because I enjoy being with the fellas. I’ve been playing with a lot of these guys for a long time. It’s just the camaraderie. We’ll get a group sometime and we’ll go to Perdido. They’ve got the condos over there and we’ll sometimes take groups of eight and get a condo that sleeps eight people — four rooms with two king beds in each room — and each one has a separate bath.

“There’s a big table where you can play cards if you want to and a big kitchen. We get over there and the first thing we do is go buy groceries for a few days. We’ll cook steaks every night and cook breakfast and just being around and cutting up with the fellas, that’s fun. And then there’s the golf, which is quite a bit of fun. I enjoy it. I don’t know what I can say; that’s my life really. That and my doggies.”

What was his next day at Azalea City like after the 2 aces in one round?

“It was just a regular day to me but it was kind of embarrassing because everybody was coming up to me — they had heard about it, and I don’t particularly like the fanfare like that,” he said. “But it ain’t going to happen again, ya know. I just enjoy playing.”

And he got off light when it came to the tradition of the person making a hole-in-one having to buy drinks for the others.

“I got all the players names on [the scorecard] and we only had 10 out there that day and some of them didn’t even want a drink, so I got off pretty cheap. But I left the bartender a good tip,” he said.