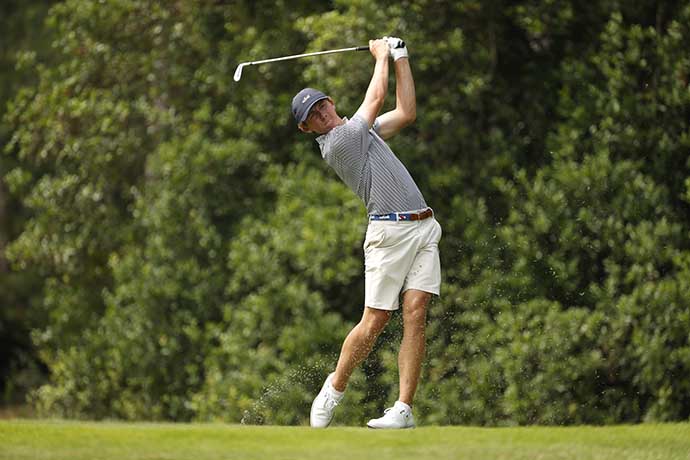 The two Alabamians in the US Junior Amateur field each won two matches Thursday to reach the quarterfinals round at the Country Club of North Carolina in Pinehurst, North Carolina.

Gordon Sargent, a Vanderbilt signee from Birmingham, topped Carter Loflin 2&1 in the Round of 16 to advance to his US Junior Amateur quarterfinal match.

Nick Dunlap, of Huntsville who is committed to the University of Alabama, needed 20 holes to knock off Matthew Comegys. In that match, Dunlap was 4-up with eight holes to play before Comegys rallied to send it to a playoff.

Dunlap, the No. 3 seed, and Sargent, the No. 8 seed, were the highest seeded players remaining in the US Junior Amateur field.

Guntersville’s Paul Bruce held off a strong field with a final-round 3-under-par 69 to win the Alabama Boys State Junior Championship at Lakewood Golf Club in Point Clear on Thursday.

Bruce finished at 12-under 200 in the 54-hole tournament that saw rain delays the first two rounds and high temperatures and humidity in the final round.

Bruce is headed to UAB for his college golf career.

“This is definitely my biggest tournament win,” Bruce said. “This gives me a lot of confidence going into college. It feels good.”

Chase Kyes of Birmingham put on a final-round charge to finish second, two shots behind Bruce. Kyes posted 4-under 68 and 10-under 202 for the tournament.

Gibson Charlton of Enterprise also shot 4-under in the final round and finished at 9-under 203. Hartselle’s Tristin Wisener won a scorecard playoff against Stuart Dickson of Trussville to claim fourth. Both Wisener, who finished with a 68, and Dickson, who closed with a 74, finished at 204.