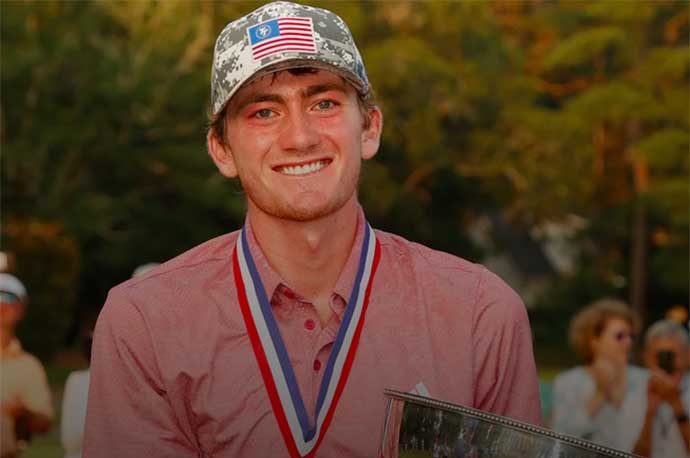 The match’s turning point was the 26th of 36 holes

Among the notable past winners of the tournament are Tiger Woods, David Duval and Jordan Spieth. On Saturday, Dunlap added his name to the championship trophy.

Dunlap, a Huntsville native who plays at Canebrake Club in Athens, was seeded third after the qualifying round and then won six straight matches on the way to the championship at the Country Club of North Carolina in Pinehurst.

With the win, Dunlap earns an automatic berth into next year’s U.S. Open Championship at Brookline, Massachusetts. He had already qualified for the upcoming U.S. Amateur at Oakmont.

In his past six tournaments, Dunlap has three wins, a pair of second-place finishes and a fifth-place finish. He also won the U.S. Am qualifier.

Birmingham’s Gordon Sargent made it to the quarterfinals but fell 6&5 to Luke Clanton of Miami Lakes, Fla.

Nick Dunlap: ‘The hours and hours that nobody sees’

“It’s unbelievable,” said Dunlap, who is committed to play at the University of Alabama. “The hours and hours that nobody sees, it finally has paid off.”

Dunlap said improvement in a number of aspects has fueled this surge of success.

“I feel like a lot of short game and a lot of confidence; just grinding week in and week out,” he said.

The final match went back and forth throughout. Dunlap led early and was 1-up at after the first 18. Trolio regrouped in the afternoon, though, and took a 1-up lead with a birdie on the 23rd hole in the same-day, 36-hole final.

Dunlap took control starting at the 27th hole, winning 4 of 5 holes to go 3-up. Trolio got one hole back before Dunlap’s up-and-down from a greenside bunker on the 34th hole to close out his counterpart from West Point, Mississippi.

The turning point: a par putt to halve the 26th hole when he was 1-down that swung momentum in Dunlap’s favor.

“I have made putts like that – whether it is your own putting green or tournaments like that. It’s just one more; it really is,” he said. “I hit a perfect putt and it went in.”

Trolio said he played good golf but a couple of missed putts were the turning point for him.

“I kind of played my golf throughout,” said Trolio, who is an incoming freshman at LSU. “A couple of putts didn’t go my way. I let that kind of bother me a little bit. That’s kind of what came to this. Hitting the golf ball, I feel like I did a pretty dang good job of that.”

After taking some time off, Dunlap will begin preparing for the U.S. Amateur. How much time?

“I’m going to take four days off,” he said. “I’ve been playing so much golf. Oakmont is going to be a challenge. I have a couple of things I need to be working on, but I couldn’t have better preparation than this. It’s awesome.”