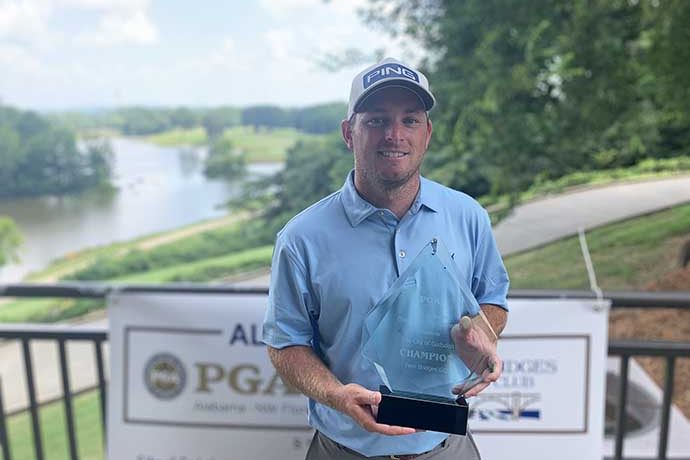 Steven Setterstrom and Hunter Hawkins staged their own version of the 1977 Open Duel in the Sun between Tom Watson and Jack Nicklaus in the Alabama Open this past weekend.

Just like Watson and Nicklaus did at Turnberry in that Open 44 years ago, matching each other shot for shot over the final 36 holes with Watson edging the Golden Bear by a shot, Setterstrom, a professional, and Hawkins, an amateur, waged their own battle in the final two rounds.

But it was a 20-foot birdie holed by Setterstrom, who is listed as a Forme Tour player, on the final hole at Twin Bridges in Gadsden that proved to be the difference. Setterstrom’s edge came with a first-round 64 that gave him a two-shot lead heading into the second round. He finished at 20-under 196.

Hawkins opened with 66 and finished at 19-under 197. Setterstrom, who is from Mobile and played collegiately at the University of Alabama, pocketed $5,000 for the win.

Florence’s Austin Gean who recently turned professional after helping Arkansas Tech to the Division II men’s golf championship, took home third-place money of $2,500. He shot 66 in the final round of the Alabama Open and finished eight shots behind at 11-under 205.

Six players tied for fourth at 208.

Hawkins, of nearby Ft. Payne, held a one-shot lead through 52 holes. But Setterstrom pulled even with a birdie on the 17th hole before winning on the final hole. In 54 holes, Setterstrom made 21 birdies and one eagle. Hawkins was bogey-free in the tournament.

PrevPrevious ArticleHuntsville’s Nick Dunlap captures US Junior Am title
Next ArticleOxmoor Valley: Ridge and Short Courses are no pushoversNext