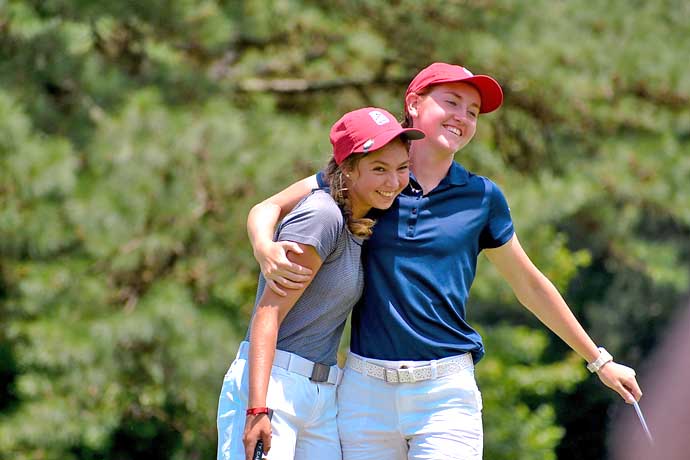 Dunlap, Sargent advance at US Junior Am

Their 5-under 137 total was one shot better than the team of Hannah Pope/Tori Roush, who shot 3-under in the final round to finish a shot back. Pope and Roush are teammates on the University of North Alabama women’s golf team. Pope is from Florence and Roush is from Fairhope.

The AGA Four-ball  tournament was played in off-and-on rain showers that made for difficult conditions.

“The wet conditions made the course play long,” Davidson said. “We stayed focused and played through it.”

Davidson was coming off a runner-up finish to Taylor Trible at the Alabama Women’s Amateur championship played at the Robert Trent Jones Golf Trail at The Shoals.

Although weather conditions were tough, Pope did manage one highlight in the second round.

“Today was such a fun day,” Pope said. “The highlight of my round was on hole 17 when I holed out for eagle from 190 yards.”

Carson McKie of Hoover and Emma Pittman of Pike Road also shot 3-under in the final round and finished third at 140.

Two familiar faces teamed up to win the Women’s Senior Championship division. Kathy Hartwiger of Birmingham and Lea Green of McCalla shot back-to-back rounds of 64 to finish at 14-under 128. That was three shots better than Donna Lowen of Huntsville and Susan West of Tuscaloosa, who closed with a 65.

Amanda Miller of Albertville and Lisa Jones of Guntersville finished third in the Senior Championship division at 1-under 141.

Leah Head of Birmingham and Theresa Stratton of Opelika won Senior Flight 1, while Dina Murray of Chelsea and Sue Raines of Florence won a scorecard playoff to finish second within Senior Flight 1.

Deborah Rouse of Birmingham and Jamelle Shaw of Shoal Creek won Senior Flight 2 by two shots over Deb Stewart of Fairhope and Olivia Iturbe of Mobile.

Lori Holibaugh of Foley and Nita Fitzgerald of Gulf Shores beat Candy Mitchell of Springville and Lynn Glover of Birmingham in a scorecard playoff to first within Senior Flight 3.

Joy Mills and Weety Vickery of Decatur finished first in the Senior Flight 4.

Huntsville’s Nick Dunlap and Mountain Brook’s Gordon Sargent qualified for the match play portion of the U.S. Junior Amateur Championship by easily making it through qualifying stroke play at the Country Club of North Carolina.

Dunlap, a University of Alabama commitment, tied for third with rounds of 68-68, while Sargent, a Vanderbilt signee, shot 71-67 to finish tied for eighth place. The top 64 players qualified for match play.

Kelly Chinn of Virginia claimed medalist honors at 12-under-par 132, while Oklahoman Andrew Goodman was second at 135.