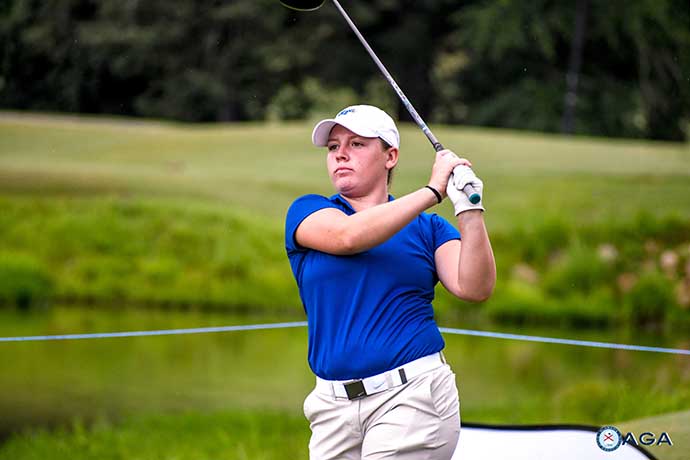 Consistency proved to be the right recipe Thursday in the second round of the Alabama Women’s Stroke Play Championship.

Mychael O’Berry and Sophie Burks each shot 1-under-par 70 for the second consecutive day to claim a share of the lead at 140 heading into Friday’s final round at the Timberline Golf Club just south of Birmingham.

One champion was crowned Thursday, as Barbara Brown successfully defended her title in the second year of the Super-Senior Championship. Brown, of Northport, followed her opening 80 with an 86, to edge Birmingham’s Jane McGriff by one shot. Another Birmingham golfer, Lynn Glover, finished third at 171.

O’Berry, who plays for Auburn University, and Burks, who plays for Middle Tennessee State, will begin the final round Friday with a three-shot lead over Midland City’s Lauren Thompson, who shot 72, is in third place at 143.

Auburn’s Elisabeth Preus shot 71 and is in fourth place at 144.

First-round leader Ashley-Sinclair Curtis slipped to fifth place after shooting 76 Thursday. She and fellow Enterprise resident Emilia Smith (71) are tied five shots behind the leaders at 145 with 18 holes to play.

Laura Beth Yates of Lake View posted a 10-over 81 to take the lead in the Tournament Division. Her two-round total is 166. Susan West, a Tuscaloosa native, and Birmingham’s Kathy Hartwiger share the Women’s State Senior Amateur Championship lead at 3-over 145. Hartwiger matched par with a 71, while West finished with a 73. Albertville’s Amanda Miller is a distant third at 152.

Debbie Atchley, of nearby Pelham, maintained her lead in the Tournament Division. She shot an 8-over 79 and is at 154 through 36 holes. Hoover’s Barbee Bryant is second at 163.