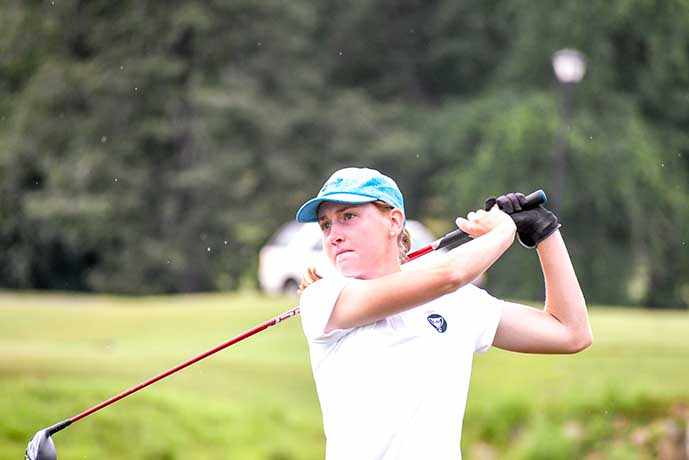 Navigating through rainy conditions, Ashley-Sinclair Curtis grabbed the lead after the first round of the Alabama Women’s Stroke Play Championship on Wednesday.

Curtis, of Enterprise, shot 2-under 69 in her opening round and leads by one shot over Hoover’s Mychael O’Berry and Tallassee’s Sophie Burks, who each shot 1-under 70.

The Alabama Women’s Stroke Play Championship is being played at the Timberline Golf Club, about 25 miles south of Birmingham. The course was designed by Jerry Pate.

Florence’s Hannah Pope, who plays at the University of North Alabama, is one of two players who shot even-par 71. Lauren Thompson, of Midland City, also is at 71. Kate Ha, of Auburn, is at 72.

Curtis, a recent Enterprise High School graduate, made five birdies and three bogeys in her first round, shooting one-under on each side. O’Berry, who plays at Auburn University, made three birdies and two bogeys, but it was Burks, who plays for Middle Tennessee State, who had the day’s wildest ride. She was four-over-par through 12 holes before finishing with a flourish. She got back to even par by stringing together four straight birdies starting at No. 13, and then finished with a birdie on the final hole to get into red figures.

Kyung-Hwa Theodoss of Hampton Cove and Laura Beth Yates of Lake View share the lead in the Tournament Division after shooting 85.

Susan West, of Tuscaloosa, shot a one-over 72 to lead the Senior Amateur Championship also being played at Timberline, one of the Birmingham area’s top courses. Birmingham’s Kathy Hartwiger and Albertville’s Amanda Miller are tied for second place at 74.

Debbie Atchley, of nearby Pelham, posted a 75 to take a four-stroke lead over Barbee Bryant, of Hoover, in the Tournament Division.

Northport’s Barbara Brown’s opening round of 80 gives her a two-stroke lead over Jane McGriff of Birmingham in the State Super-Senior Division.