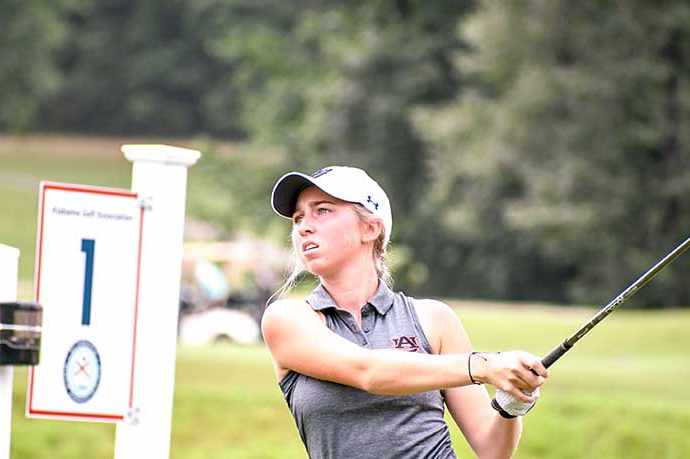 It was a banner Friday for Mychael O’Berry and Kathy Hartwiger at Timberline Golf Club, as both claimed Alabama Golf Association women’s tournament victories.

Hartwiger, of Birmingham, capped an impressive win by shooting 74 in the final round of the Alabama Women’s State Senior Amateur Championship. Hartwiger, whose 54-hole total of 219, gave her a one-shot win over Tuscaloosa’s Susan West.

It was an historic win for Hartwiger, whose resume now includes 20 Alabama Golf Association titles, the most in the association’s history. Full results are here.

Hartwiger and West were tied entering the final round. Chris Spivey of Pell City shot four-over 75 to finish in third place at 229.

Debbie Atchley, of Pelham, posted an 81 to claim first place in the Tournament Division with a 54-hole total of 235. Hoover’s Barbee Bryant shot a 10-over 81 for the final round and was second at 244.

O’Berry and Sophie Burks began the final round of the Alabama Women’s Stroke Play Championship tied for the lead, having matched each other with 1-under-par 70s in each of the first two rounds. But it was the Auburn University golfer who emerged with the victory, thanks to a 1-over 71, with Burks slipping to second place with a final-round 73.

O’Berry, from nearby Hoover, finished the 54-hole tournament at 2-under 211, the only player to break par at Timberline, which is just south of Birmingham. Tallassee’s Burks, who plays at Middle Tennessee, finished at even-par 213.

O’Berry and Burks battled throughout the final round. O’Berry took a one-shot lead on the eighth hole that she never relinquished when Burks made a bogey.

Midland City’s Lauren Thompson shot 74 on the final round and finished third, six shots behind at 217.

Florence’s Hannah Pope, who plays at the University of North Alabama, shot 72 in the final round and tied for fourth place along with Auburn’s Elisabeth Preus at 219.

Laura Beth Yates, of Lake View, posted a 17-over 87 to take first place in the Tournament Division.