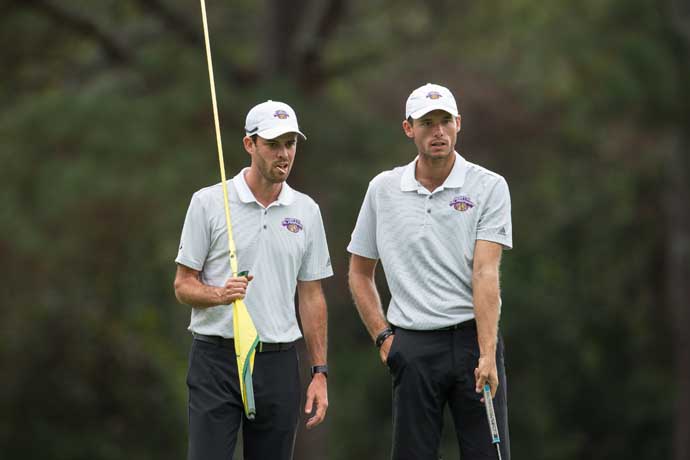 Cullen Carstens took UNA from Division II to Division I

The University of North Alabama men’s golf team is in the market for a new head coach following the announced departure of Cullen Carstens.

First-year UNA Athletic Director Dr. Josh Looney said the department will launch a national search for a new coach in May 2022.

Current North Alabama head women’s golf coach Neil Self will serve as interim director of UNA Golf from January 1, 2022, through the end of April. Graduate assistant coach Clayton Larsen will take on increased coaching duties with the men’s program in the spring. Before being named head coach of North Alabama’s women’s golf team, Self was an assistant coach for the men’s team for three seasons.

‘It’s been an honor’

“It’s been an honor to serve as the head men’s golf coach here at North Alabama for the past four years,” Carstens said in a release. “I want to thank President (Ken) Kitts and (then-AD) Mark Linder for giving me the opportunity to lead this program, Dr. Looney for his energy and passion for this department, and everyone at UNA Athletics that I’ve been privileged to work with.

“Simply put, our staff and coaches are the best, and their love for our student-athletes is what makes this place so special, Carstens added.

“I’ve been blessed to know a great group of guys during my time here, and I’m grateful to each and every player I’ve had the opportunity to coach.  Your hard work both on and off the course has laid the foundation for a bright future for UNA Golf.”

Carstens said North Alabama’s golf program is on solid footing, given the support it has within its team alumni base.

“We have a proud group of Lion golf alums, as well as numerous friends of this program, and I am grateful for all the support they’ve given me, and will continue to give this team going forward,” he said.
Carstens joined the UNA golf program on July 31, 2017, after coaching stops at Oklahoma State, Jacksonville State and Kansas State.

He led the Lions through their final season in the NCAA Division II in 2017-18 and into their first season of Division I competition in 2018-19.

“Florence is a special place, and the people and community here have truly made this feel like home for my wife Kelsey and I,” he said. “We will be UNA fans forever, and are excited to cheer on the Lions in what will no doubt be an exciting future.  Thanks again to the entire Shoals community, and as always, Roar Lions!”

With Cullen Carstens at the helm, UNA recorded its first tournament win as a Division I program in the spring of 2019 as the Lions won the North Alabama Spring Classic, defeating a field of 11 other Division I programs. The Lions were led by Aaron Jackson, who was medalist at the event.

A native of St. Louis, Missouri, Carstens played collegiately at Missouri Baptist University and graduated from MBU with a Bachelor’s of Marketing/Business Administration in 2007.