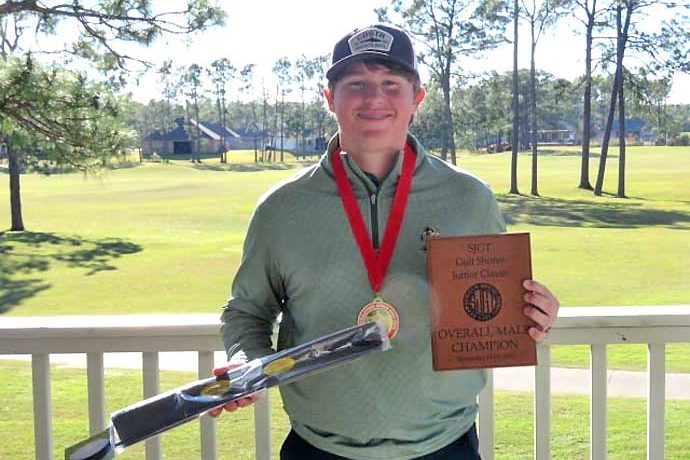 Two junior golfers from Alabama and one from Georgia were division winners at the recent Gulf Shores Junior Classic held by the Southeastern Junior Golf Tour in Gulf Shores, Alabama.

The tournament is part of the SJGT series and was played at the Gulf Shores Golf Club. Players from six states – Missouri, Alabama, Georgia, Florida, Mississippi and Louisiana – competed in the 36-hole tournament.

Vivian Volion of Springfield, Louisiana, was fourth (158), while Harper Anne Hinckley of McComb, Mississippi, was fifth at 159.

In the boys 12-13 division, Rivas led by three shots after a first-round 76 and then closed with a 71 to pull away for an 11-shot victory. Players from Alabama took the next four spots to round out the top five. Mobile’s Parker Crabtree finished second at 158, while Birmingham’s Ryan Pugh was third at 162. Jackson Stubbs of Mobile was fourth (169) and Fairhope’s Waylon White was fifth (173).

Parker emerged with the win on a crowded leaderboard in the 14-19 boys division, shooting rounds of 71-70 for a 141 total. He held off the fast-finishing Trace Bracknell of Tuscaloosa, whose 66 in the final round was the low score of the tournament. He finished at 143. Enterprise’s Gibson Charlton closed with a 69 and finished another shot back at 144.

Reed Sweigart of Roswell, Georgia was fourth at 145, and Slidell, Louisiana resident Logan Addison Batiste was fifth at 146 after shooting 68 in the final round.