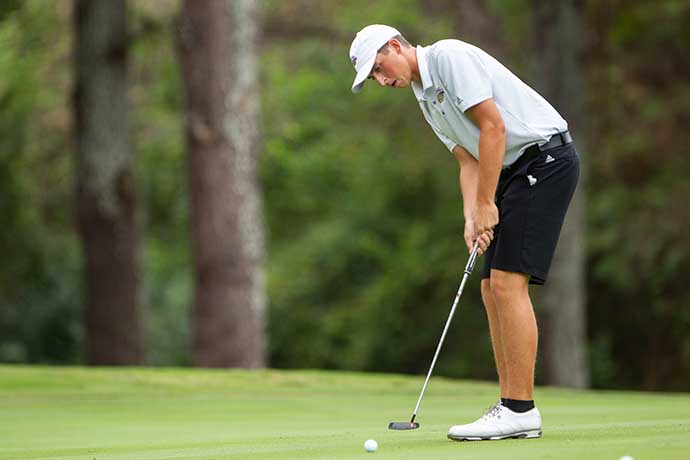 UNA Returns 11 Months After Collegiate Golf in Alabama was Halted

It was March 10, 2020 and Jackson Wedgeworth and his University of North Alabama men’s golf team teammates were riding high. Wedgeworth was coming off arguably his best college tournament, a one-shot win at Auburn University’s Tiger Invitational and helping the Lions tie for ninth place in a star-studded field.

Just a few days later, the golf season and the rest of college spring sports came to a grinding halt, courtesy of the coronavirus pandemic.

On Monday, 11 months later, UNA golf team returns to the links. Coach Cullen Carstens is eager to see how the Lions, including Wedgeworth – who returned for a final season after the NCAA granted spring sports athletes an extra year of eligibility – will perform after such a long absence.

Members of the ASUN Conference, the Lions play their first tournament Feb. 8-9 at the Oldfield Invitational in Bluffton, South Carolina.

Carstens expects the Lions to have some rust after such a long layoff, but he’s confident the roster he has assembled will be ready to meet the challenge of an ambitious six-tournament schedule.

“It’s just been so unique,” said Carstens, who is beginning his fourth season as coach of the of the University of North Alabama Lions.

“One of the hardest parts for sure was having to tell the guys last March that the rest of the season wasn’t going to happen. Then, when they came back after the summer the conference decided we weren’t going to be able to play our fall schedule. The hardest thing probably has been the unknown in making plans and preparations. It has been month to month, week to week and day to day on what will change and all the protocols that are in place.”

University of North Alabama Shakes off 11 Months of Rust

Although team competition was shelved during the spring and fall, there were some tournaments available that were put together by the Golf Coaches Association of America. Carstens put together intrasquad events in an effort to keep his team tournament tested.

“To their credit we probably had our best fall, scoring and competing-wise, since I have been here,” Carstens said. “It isn’t the same as tournament golf but those guys did a really good job treating it as much as they possibly could like a tournament. There will be some rust to knock off when we start, but I think there is going to be a lot less rust than there could have been had they not performed so well this fall.”

Wedgeworth (Soso, Mississippi) is in his third season at the University of North Alabama after playing two years at Mississippi Gulf Coast Community College, and he has been the team’s most consistent performer.

Staying Sharp During the Layoff

Carstens was impressed with the way his team handled the shutdown.

“We had a great fall of practice and competing, and they didn’t complain,” he said. “That’s why they have been so looking forward to the spring and getting to tournaments. So am I.”

Carstens said unity is one reason the team thrived during the shutdown.

“We have different guys step up at different times,” he said. “Jackson is one of our captains and he is always a good leader, obviously when it comes to his play on the course. But he also has some goals and ambitions after UNA and he’s been working hard. Guys see that.

“We work hard on the culture here and what it takes to be successful,” Carstens continued. “After a few years, guys really buy into what has to change for us to get to that next level, especially now that we have moved up to Division I. They have taken ownership of that and we are starting to see the fruits of that labor.”

After the long wait, the Lions look forward to seeing how they stack up in what should be a competitive ASUN Conference Tournament in mid-April.

How good is the ASUN? Carstens points to early-season results by league rival Liberty, which lost in a playoff with Florida at the Timuquana Collegiate in a field that included Oklahoma State, Florida State, Virginia, North Florida of the ASUN, Purdue and Notre Dame.

Kennesaw State, another conference rival, finished second in at the Any Given Tuesday Intercollegiate in its spring debut.

“When we are talking about teams like that, the top of our conference isn’t just competitive on a regional or local level, they are competitive with any team in the country,” he said. “We have to play well to be able to beat some of these teams, and I think our guys are ready for it. I know we haven’t competed in a tournament yet but on paper I think this is our most talented we have had since we moved up to Division I and definitely our deepest team we’ve had. We’ll find out pretty quickly where we stack up when we tee it up.”