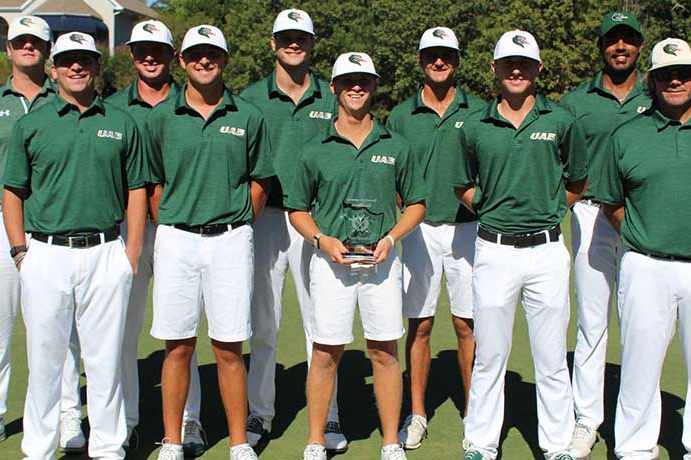 The UAB Blazers men’s golf team made a clean sweep of its fall tournaments Thursday by winning its own Graeme McDowell Invitational at Greystone Golf and Country Club.

The Blazers, who previously won the Jim Rivers Intercollegiate and the Scenic City Classic, rallied from a three-shot deficit to overtake Georgia Southern for the team title. Four Blazers finished in the top 20 individually to lead the way to a five-shot victory.

It’s the first time in program history the Blazers have won three consecutive tournaments. They end the fall season with a 29-0 record.

Louisiana-Monroe was third at 861, followed by Middle Tennessee at 863. Other teams from Alabama included South Alabama, which finished tied for seventh at 883, and Troy, which shot 884 and was ninth in the 10-team field.

‘Hungry’ UAB Team Was Determined to Be Great

“I am so proud of how our players competed this week and throughout the entire fall season,” UAB head coach Mike Wilson told UABsports.com. “To be the first team to win three straight tournaments at a program with history as rich as UAB goes to show how hungry and determined this team is to be great.”

The Graeme McDowell Invitational is named for the Northern Ireland PGA Tour and European Tour player who played for UAB. In 2002, McDowell won six of 12 events and the Haskins Award, given to the top collegiate golfer in the United States.

At Greystone, The Blazers were led by senior William Walker III and junior Nick Robillard who each tied for third overall at 4-under. Walker III (69-71-72) was at or below par in all three rounds, while Robillard (75-71-66) stepped up huge in the final round with a collegiate-low 66, which catapulted the Birmingham native from 23rd to third place. Robillard played bogey-free golf and carded six birdies.

South Alabama’s Yannick Schuetz tied for sixth at 214, while Troy’s George Burch tied for 15th at 217.