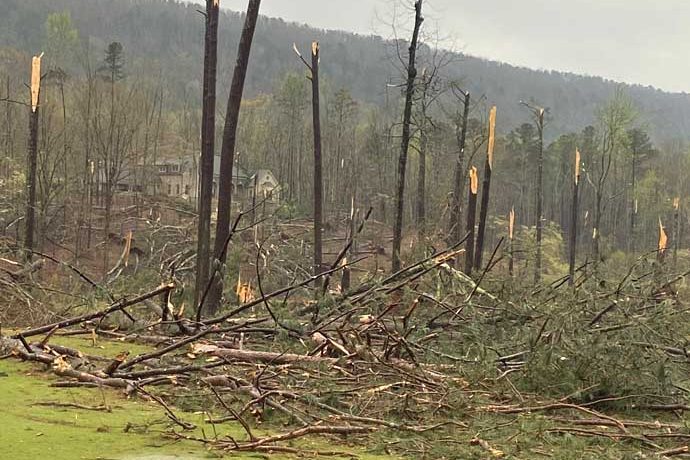 ‘No signs blown down, no limbs on the course. It’s the craziest thing you have ever seen’ – Timberline Pro Joe Kruse

Shoal Creek, which hosted the 2018 U.S. Women’s Open and the 1984 and 1990 PGA Championships among others, sustained major damage to at least four holes, according to reports.

Nearby Greystone Golf and Country Club and Timberline Golf Club in Calera escaped the wrath of the storms that lashed central Alabama, killing five people and leaving a wide path of destruction in their wake.

Shoal Creek, annually listed as the No. 1 course in the state, and its surrounding neighborhood were hard hit.

Reports indicate that holes 4, 5, 6, 7 received heavy damage. Photos from the course show trees shredded and strewn about the fairways like toothpicks. Shoal Creek is scheduled to host the Shoal Creek Invitational men’s college tournament April 5-7, but it is uncertain whether the event will be postponed.

Efforts to reach the club were unsuccessful Friday, but there were no reported injuries.

Elsewhere, pro shop personnel at Greystone, which is a scant 4.7 miles from Shoal Creek, reported no damage to their Founders and Legacy courses.

The Legacy course was closed when the tornadoes struck and the Founders course was about to close when tornado warnings were issued. Employees went to the club’s basement to wait out the storm and emerged unscathed.

Timberline Golf Club is 32 miles southwest of Shoal Creek and Greystone, but a tornado skirted the golf course and scored a direct hit on the surrounding neighborhood, according to PGA professional/club manager Joe Kruse.

“We had zero damage,” Kruse said. “The neighborhood had about 30 homes damaged. I cannot believe we did not have anything happen here at the course. No signs blown down, no limbs on the course. It’s the craziest thing you have ever seen.”

Kruse said the tornado hit just south of the course. He had sent all of his employees home ahead of the storm.

The tornado outbreak did not come as a surprise.

Forecasters had predicted days earlier that a severe storm outbreak was not just possible, but probable due to atmospheric conditions that were ripe for tornado formation. Many forecasters said it was likely that the tornadoes would stay on the ground for long periods.

Officials were still surveying the damage this weekend. It appeared that the tornado that hit Shoal Creek was not the same one that skipped over Timberline.

Kruse said the tornado that spared his course later hit the small community of Columbiana.

“Once it passed over the interstate it kind of let up a little bit here and, when it hit Columbiana, it hit pretty hard,” Kruse said.

Before the tornado outbreak, courses in Alabama have mostly been dealing with heavy rain in recent weeks. Early last week, much of the state received from between 2 to 5 inches of rain, leaving bunkers washed out and in need of repair.