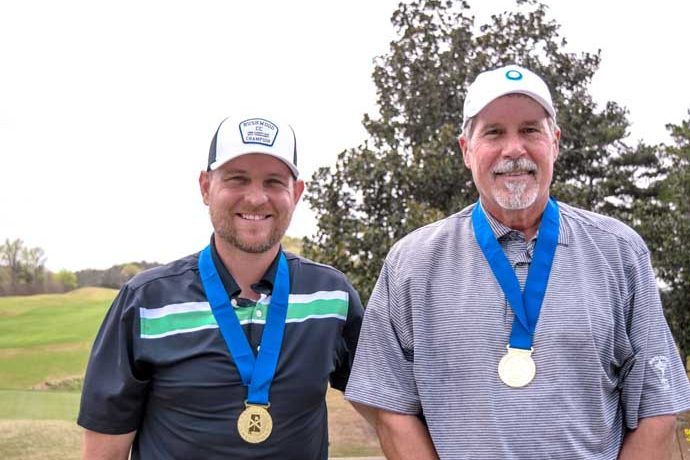 The Alabama Golf Association opened its season with a pair of tournaments last week, starting with the Ladies Two-Person Scramble followed by the Alabama Partners Kickoff Scramble.

The partners tournament, which consisted of a mixed team event and a male division, wrapped up Saturday.

In the male division. Eric Shugart of Owens Cross Roads and Tom Jungkind of nearby Hoover emerged victorious with a two-round total of 23-under-par 121. The duo closed with an eagle on the final hole to finish with a 60 on the par-72 layout.

The eagle provided a two-shot margin of victory over Hoover residents Craig Melton and Matt Barnes, who used three eagles to shoot 59 in the second round. They posted a 21-under 123 after opening with a 64.

Chelsea’s Brad Pettus and Huntsville’s John Michael teamed to win the second flight in the male division. Pettus/Michael shot 67 in the closing round to finish at 12-under 132.

Hoover’s Jeremy Helms and Trey Hall finished three shots behind at 135 after shooting 69 in the final round.

Suzie Stanley of Santa Rosa Beach, Florida and Jason Leblanc of Athens won the mixed team Division in a scorecard playoff. They shot 63 in the final round and finished at 14-under 130.

The two-day event is conducted as 36 holes of scramble stroke play. Entries are open to any side comprised of the following, regardless of age: male/male, male/female, female/female. One member of each side must be at least 16 years of age.

On Thursday, 26 women’s teams teed it up at Ross Bridge to officially kick off the AGA’s golf season.

The Fairhope team of Tami Green and Ann Lanier picked up the win, shooting 7-under-par 65 to win by one shot over Lea Green of McCalla and Nancy Gavin of Jackson’s Gap. Four teams finished in a tie for third place, four shots behind at 2-under 70.

The Decatur team of Avonne Shelton and Weety Vickery shot 78 to win the second flight.

Next up on the AGA schedule is the 39th Alabama State Four-Ball Championship scheduled for April 29-May 2 at Wynlakes Golf and Country Club.