Tagmarshal – The Answer to Slow Play? 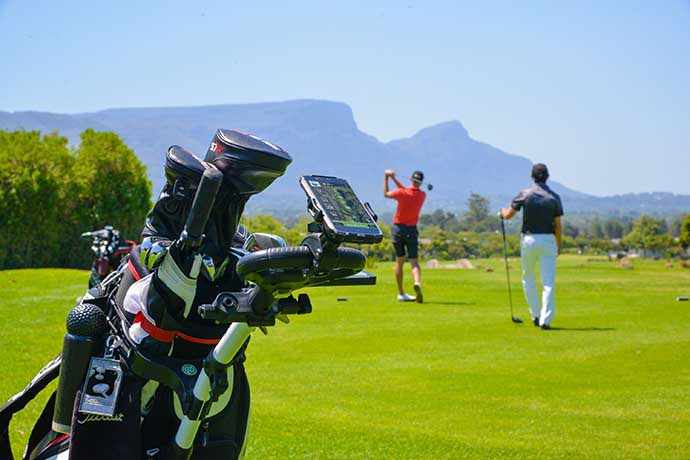 The impetus for the creation of the Tagmarshal pace of play system in use at many of the top golf courses in the U.S. and abroad came from a text message to Bodo Sieber.

“What happened was that two of my friends were playing on a beautiful course on a beautiful Saturday and their group was stuck on the 15th hole alongside three other groups,” Sieber, the CEO and co-founder of Tagmarshal said. “They all picked up their phones and called management and asked why they were doing that to them – making them wait. They wanted to know where the marshal was and told them that wasn’t what they came there for.”

One of the friends texted Sieber, who at that time was heading up a business that was tracking technology and efficiency solutions for corporations, wanting to know if he could come up with a solution to help golf courses become more efficient.

That was six years ago. Today, the Tagmarshal system is in use at name-brand facilities such as Erin Hills, Whistling Straits, Winged Foot, Baltrusol and Oakmont.

“We created a system that essentially speeds up the game of golf,” said Sieber. “It’s a huge challenge for the game. Players have less time to play, especially younger players that are the next generation of the game. We came up with technology solutions to fix that.”

Sieber won’t divulge how the Tagmarshal system works, but essentially it tracks each group and compiles data that courses can use to increase their efficiency in a variety of ways. With Tagmarshal data, course operators can figure out ways to set their course up to obtain maximum efficiency and chart trends and areas that need attention in order to provide the best experience possible.

Tagmarshal’s first big breakthrough into the market came in 2015.

“It took us about six to 12 months to get our first version working,” Sieber said. “We presented our system as a new and very green company at the PGA Show. We got a call from Erin Hills (in Wisconsin) and they said it looked fantastic and wanted to know when we could deliver it to them.”

Sieber, who admits he is not an avid golfer, didn’t realize how big of a deal having an inquiry from Erin Hills was until he saw his colleagues “jumping up and down.”

“Erin Hills had already been earmarked to host the U.S. Open in 2017,” he said. “They told me that this just wasn’t a course, it was a major course. It was a great opportunity to start at the top end of the market.”

From there, other courses jumped on board and Tagmarshal was on the way to success. The early courses also provided key feedback as the technology continued to evolve.

“They told us what we can do well, what we could do better at,” Sieber said. “We have always kept it that way. We are not operators. We are reasonable golfers. It’s the people who really know how to run the game, they have to tell us what they need and then we have the technology to make it happen.”

Sieber said successfully launching at Erin Hills was crucial. He said with the help of Tagmarshal, the former host of the U.S. Open is now generating an extra $150,000 in greens fees annually.

“The ultimate end game, obviously, is to provide the course with the controls so they can get more capacity onto the course but at the same time provide an even better playing experience than they ever had,” Sieber said.

At a course like Erin Hills in Wisconsin, a walking-only course, a tag is clipped onto a bag or a caddie at the start of play and the starter informs the group what it is for and reminds groups to stay in position to ensure everybody stays on time and has a good experience.

If a group falls out of position, a marshal is dispatched to remind them to get back in position.

At other clubs the system is attached to carts, and groups are monitored. If bottlenecks develop, the course can quickly manage it effectively and without confrontation.

“The traditional marshaling role is not very effective,” Sieber said. “But with some training, that person can become a player assistant rather than a police person. And that is the space we are creating.”

More importantly, Sieber said the Tagmarshal system allows the course to compile data and determine the best way for the course to be set up depending on the amount of expected play and conditions.

“It’s like a factory,” he said. “You set it up to run efficiently and if it doesn’t, it affects your business.”

Tagmarshal added an option that also functions as a GPS that shows the hole and other information. It also provides tells players when they are out of position.

“The system lets you manage yourself and that suits a lot of people,” he said. “It’s phenomenal what you can do if you have data and what you can really measure when you have the variables that have an impact on your performance.”

And, get those five-hour rounds down to a comfortable four hours or less on courses across the nation, including Alabama golf courses.

Gregg Dewalt, former sports editor of Florence’s Times Daily, is the editor of Alabama Golf News. Reach him at TeeTimesGregg@gmail.com.