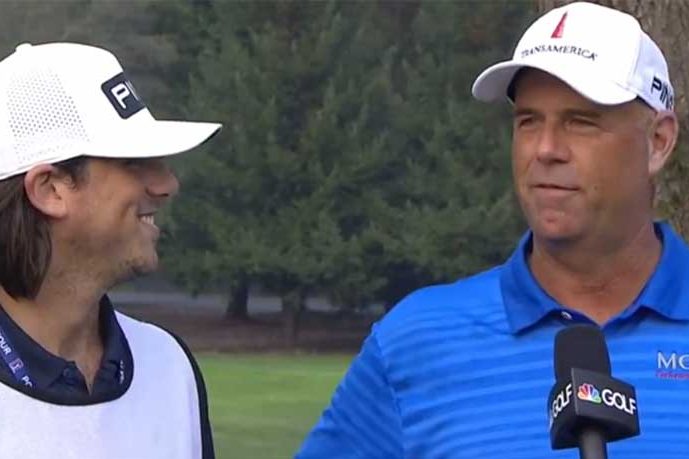 In early April 1997, Stewart Cink was just a young pup in professional golf, heading to Augusta, Georgia, excited to be teeing it up at The Masters for the first time.

Cink, then just a 24-year-old fledgling pro on the PGA Tour, had yet to celebrate his first of seven career tour wins. Playing the villain in taking down sentimental favorite Tom Watson in the 2009 Open Championship was still 12 years away.

Along with the excitement that comes with getting to compete in The Masters, Cink had more on his mind than just preparing for the tournament.

Back home in Atlanta, Cink’s wife Lisa was due to give birth to their second son any day. The timing of Reagan Cink’s arrival would be the determining factor on whether Stewart would fulfill a lifelong dream of playing in The Masters.

Stewart Cink at The Masters

After graduating from Georgia Tech, where he had an outstanding college career, the former Florence resident and Bradshaw High School graduate’s career was already off to a solid start. He won three times on the then-Nike Tour in 1996 and he had qualified for The Masters by virtue of a tie for 16th in the 1996 U.S. Open at Oakland Hills.

“Normally your first Masters is a really great experience because you have reached a place in the game not too many people ever get to say they have reached,” Cink said last week in a phone interview.

“My first experience at the Masters was definitely a little different. The eyes of the golf world are focused on it. I was a rookie on tour that year. I had qualified for the U.S. Open the year before and I felt like I had arrived, but that arrival spot is a lot to handle. I remember being a little bit overwhelmed.”

Stewart Cink Had Little Exposure to Augusta Prior to 1997

Stewart Cink had been to Augusta prior to 1997. As a youngster, he attended one practice round. While at Georgia Tech, the team had an opportunity to play Augusta National once each year. But in his four years, Cink only got to play 28 holes at the famed course.

“I basically got to play it once. Most of the guys in the program play it four straight times. It was basically all new for me. It was a lot to handle and I was woefully unprepared.”

As the week of his first Masters arrived, so did the due date for Reagan. Lisa stayed home for a doctor’s appointment to determine how close she was to giving birth. Cink went on to Augusta to begin preparing for the tournament.

Cink was three holes into his first practice round when his cellphone rang with the news. It was a green light.

“I remember Lisa calling me – this was in the early days of cell phone – in my practice round on the fourth tee. She said they were good to go and were going to induce labor,” Cink said. “Basically, I quit and went in and drove back over to Atlanta.”

Home for Reagan’s Birth, then Back to Augusta

Cink made it home in plenty of time to be there for Reagan’s birth. On Wednesday night, Stewart, Lisa and new addition Reagan traveled back to Augusta.

“Reagan came to The Masters when he was one day old,” Cink said. “If you look at the manual for parenting of a one day old, that’s probably not in there. I was kind of a mess, obviously in a lot of good ways. But it was memorable.”

He admits when he teed it up in the first round the next day, he was unprepared for the challenge Augusta National presents to first-time players. Missing three days of preparation likely led to his Thursday-Friday rounds of 75-78, well short of making the cut while another young phenom named Tiger Woods lapped the field on his way to a 12-shot win for his inaugural Masters victory.

“It was difficult to focus on the tournament,” Cink said, “It took a back seat. I knew I was kind of going to be struggling to be ready to go. But I had another child and that was a really cool thing.”

Cink said it was Augusta’s greens that gave him the most trouble – not first-tee jitters.

“I remember a couple of the greens early on, I was like, ‘Whoa, this is so much quicker than I remember in the practice round.’ The last time I had played any holes was Monday, and this was Thursday and the golf course does change a lot from Monday to Thursday.”

Specifically, it hit him on the third hole just how different the greens speeds were.

“I had a putt of about five feet and I felt like I hit it OK speed-wise and it went about five feet past. It was an eye-opener – like “Oh my gosh, I can’t believe how fast these greens are right now,’” he said. “I was just not prepared for that. That was the main thing. Golf at our level kind of works its way backward from the green to the tee as far as the way you get confidence. You can be doing everything terrible, but if you have a good putting day you feel like you are on top of the world.

“I was basically worthless from anywhere because of that. I was so scared about where my ball was going to end up.”

The outcome of Cink’s first Masters wasn’t exactly how he dreamed it up – there was no winning putt or anything like that, but he did file the experience away for future reference.

“That was probably not an enjoyable experience to go through at the time, but in the end, it was probably a good learning lesson for me – the golf course changes and on Thursday it’s like a completely different ball game, and you have to be ready for that,” he said. “It cost me those first two rounds to finally get that through my head. But then I knew what to expect the next time.”

Other than missing the cut, the week was pretty good. After all, his future caddie had just burst onto the scene.