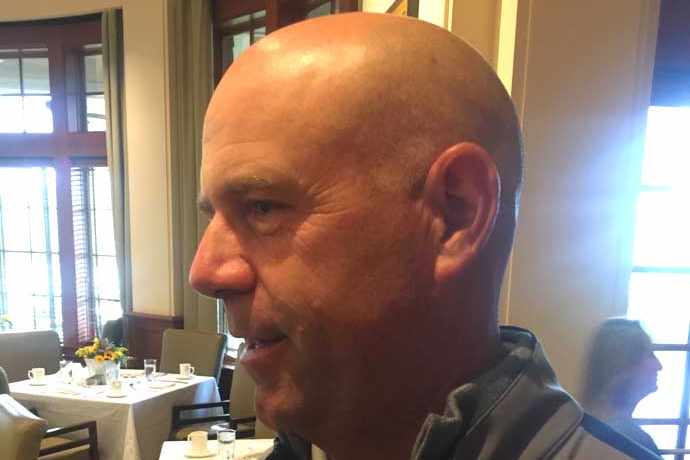 PGA Tour professional Stewart Cink hit a milestone recently when he made his 600th career start on tour at the RSM Classic in Sea Island, Ga.

Cink, who was born in Huntsville and grew up in Florence Alabama, talked with the media before the first round of the tournament. His victory at the Safeway Classic earlier this season was his seventh on tour and his first since he took down Tom Watson in a playoff at the 2009 Open Championship.

Cink currently is among the FedEx Cup points leaders. During his 20-minute question-and-answer session, Cink, who is 47, tackled topics such as the PGA Tour Champions, his positive COVID diagnosis after the fact, and the Ryder Cup.

Q: Have you ever looked in that direction (PGA Tour Champions)?

Stewart Cink: I haven’t looked that direction at all because I felt like you have enough stacked against you when you are in your late 40s on the PGA Tour that if you were to look ahead and focus on that and sort of dream big that one day I will be 50 and be out there, you are just going to stab yourself in the back out here. You are just going to add one more thing to your list of challenges. I have not let myself do that. I don’t see myself being a Champions Tour player ever until I am not exempt on the PGA Tour anymore. I’m not saying that I won’t; I’m saying I don’t see myself that way. I see myself as competing on the PGA Tour and trying to win more out here.

Q: Where do you fall on not having fans at tournaments this year?

Stewart Cink: Everything feels a little different. It’s just like if you walked into a company, you would experience and start to feel that culture pretty quickly. You would start to understand what the culture is like in that company. If you play at RSM vs. if you play at Waste Management Phoenix Open, you will understand there is two different cultures in those two events really quick – especially if you play the 16th hole at Waste Management. Every tournament has its own little culture. This year, obviously COVID has wrecked the culture of every tournament because we don’t have fans for the most part.

Q: Can you share a little bit about what having COVID was like for you and your wife?

Stewart Cink: With (wife) Lisa being in her state of health – even though she’s doing great and is coming up on four years now in remission, which is fantastic, when COVID came about we started to be very concerned about her because of the pre-existing conditions and the other difficulties health-wise that other people are facing if they had something with COVID. We went through COVID in the very beginning before there was testing before we knew that much about it. We didn’t know we had COVID until about two months later when we got the antibodies tests and we both had it. It was confirmed multiple times and then we could both point to back to a time in March when we both fell ill sequentially over about seven days. Lisa had moderate to pretty serious – not hospitalization – but severe, significant symptoms. Very flu-like. I had almost nothing. I had about half a day where I felt a little sore in my back and shoulders and that’s it. Hers was the week The Players was canceled. We didn’t really know – we just kept on. I was actually on a flight coming back from Utah – I went skiing with my son – he asked me to come out with his college friends to go skiing and I was like I’m not missing that. I flew round-trip from Atlanta to Utah and I came back and I was sick. I feel certain I was probably spreading it on the flight. This was before masks. Looking back, I’d like to change that but we didn’t know. Two months later we found out we had it. It was right before my first tournament back at RBC Heritage.

Q: What does your 2021 schedule look like and what are you most looking forward to getting back to that maybe you have missed the last couple years?

Stewart Cink: Augusta. I qualified for it ’19, but I played poorly. I was hurt that year and shouldn’t have been playing but I tried to squeak out into Augusta and that was a mistake. You look forward to Augusta. Kapalua, that’s a tournament you just love to be a part of. Really, for me considering where I started this season in the 126-150 category, I wasn’t guaranteed spots anywhere. The thing I am most looking forward to is the ability to play where I want to play and put my schedule together. I can schedule my stuff around when my sons’ weddings are in July and September. That is a real blessing to be able to do that. There is a lot more than just play where you like to play the courses. We have all kinds of stuff going on – little parties here and there, showers that I want to be a part of and now I can play when I want to play and I can schedule those weeks off and be at those events.

Q: If your other son (Conner) were to come out and caddie, what young player would you suggest he get on the bag with?

Stewart Cink: Conner is older than Reagan and he is going to come out and caddie. We have already discussed this. I don’t know where it will be yet. I don’t know that I would want either of my kids on the bag with another player because they are both too big of an asset. There’s enough disadvantage; I don’t want to give anyone more of an advantage.

Stewart Cink on the Ryder Cup

Q: You have played in five Ryder Cups – one of them was a win and the other four were not – I’m curious, what do you think was the difference that one time, what would you do if you were captain and would did you see from the captains that you think should be incorporated into that during your playing career?

Stewart Cink: The one win where Zinger (Paul Azinger) was captain in ’08, there was just an unbelievable level of organization before and there was no uncertainty about who you were going to play with, who you were going to spend your practice rounds with. It was already set. There was a system that paired up players together. There was a lot of really in-depth personality matching and studies. I think that led to us being very comfortable on the golf course and we played like we were very comfortable on the golf course. And we won. The other Ryder Cups, the captains all did a lot of work but Zinger just took it to another level with the organization. One thing the brain, the mind of a human being seeks is certainty. We don’t like surprise that much. Zinger did a great job of taking that uncertainty and surprise down to an almost an non-existent level. It enabled us to be comfortable with each other. We performed really well and they did a great job.  If I was ever captain or spoken to by a captain and asked any advice, I would pinpoint that right away as an obvious something that I would want to implement.

Stewart Cink: It definitely interests me – I think every player it interests them. I would love to be able to do that sometime, but there are a lot of people who are qualified to do that, and I haven’t been a part of any teams in an assistant captain way. There are a lot of younger players that are parts of that now every time, so it looks like maybe the ship has already left the harbor for me. I’d be willing to help in any way that I could. If they thought I could be a part of a winning team or a successful Ryder Cup or Presidents Cup team, I’d love to do it.

PrevPrevious ArticleStewart Cink Reflects on 2020 and his Resurgent Golf Game
Next ArticleFor Alabama Golf Association, 2020 was ‘a Roller Coaster’Next