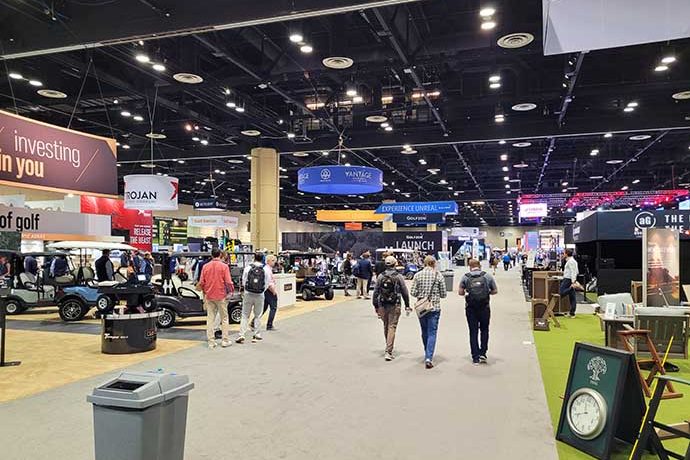 ORLANDO, Fla. – If you came to the PGA Merchandise Show looking to try out the latest and greatest in golf equipment, the Orange County Convention Center was not the place to be this week.

Ping? Nowhere to be found.

.The Show, as it is known around golf circles, had a completely different feeling from years past. Although industry insiders celebrated its return after going virtual last year due to the Covid-19 pandemic, this Show was downright tame compared to the past.

How good is Callaway’s new Rogue driver? Nobody was hitting bombs with it on the indoor range that is always one of the most popular spots for attendees.

That’s because the manufacturer skipped the show this year.

People will have to wait until somebody has a local demo day or take Phil Mickelson’s word for it that a person really can hit bombs with it.

Same thing with the Stealth driver and the new Ping 425 irons. Checking them out will have to wait until another day.

Part of that tameness obviously is due to the absence of those major manufacturers.

Part is because crowds haven’t seemed as robust – and rightfully so – due to the ongoing pandemic that has made it more difficult to travel from overseas and the U.S.

While it was disappointing that the big boys weren’t on site this year, their absence did provide an opportunity for some lesser-known brands in other areas of the industry.

Business appeared brisk in the apparel section, and the always-popular simulators were bustling with attendees wanting to check out their swings. Training aids are always in abundance at the Show, and this year was no different.

With no Footjoy and Nike around, True Linkswear, a rising shoe brand, had a steady stream of visitors.

“As weird as it sounds, it seems like we are just as busy as always,” True Linkswear Director of National Sales JD Rastovski said.

Rastovski said customers that might not have had time to stop by the True Linkswear booth in the past simply due to the volume of exhibitors had time this year to visit this year. And those visits are longer, he said, giving him more time to sell the brand.

“We’ve been so busy that we didn’t have time to notice the show being slower,” he said.

One display that was grabbing a lot of attention was the Pub OG, an enclosed gazebo-like structure that mimics the authenticity of a traditional Irish pub. The pub is prefabricated and seats six. It comes with all the trimmings of a traditional pub, including the signage and can accommodate two kegs of beer.

The idea for the Pub Og was born from when founder Cormac Artt couldn’t get into his favorite pubs due to the pandemic.

The Pub Og is expensive – it will set you back $80,000 – but it is hand crafted to your specifications. It is constructed in Ireland and shipped directly to your home, club, wherever.

Richard Hill, the business development director of the 53-year-old interior fitting firm, said they had no idea how well-received the Pub Og would be.

It turns out, he said sales were brisk, as the Pub Og could be used at a variety of venues.
The question is whether this year’s show will be the new normal or if the major manufacturers who command much of the attention return next year.