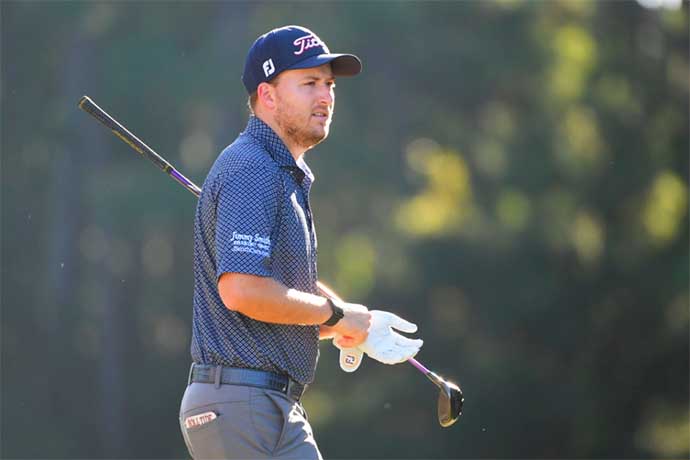 Making the turn to the back nine Sunday afternoon, Ardmore’s Lee Hodges had a two-shot lead on the field and his first win on the PGA Tour was within grasp.

Then the ALabamian got a lesson in just how fast things can change. Hodges, who played college golf at UAB and the University of Alabama, saw his putter go cold while Hudson Swafford got hot.

The result was that Hodges will have to wait for another time to win on tour. Although he shot 2-under-par 70 in  Sunday’s final round of the American Express on the Stadium Course at PGA West, Hodges fell three shots short of winning. He ended in a three-way tie for third place behind Swafford, who finished at 23-under and Tom Hoge, who like Hodges finished at 21-under.

Hodges went off as a 225-to-one long shot to win, according to Las Vegas oddsmakers.

Hodges’ third-place finish was his highest in 14 starts on the PGA Tour and his highest since gaining full tour status by virtue of his Korn Ferry Tour finish last season. He earned the biggest paycheck of his career – $402,800. He also moved up 93 places on the FedEx points list to No. 52.

He entered the final round tied for the lead with fellow tour rookie Paul Barjon and played steady through the first six holes. A tap-in birdie on the seventh hole and another birdie at No. 8 put Hodges in control of his own fate heading to the back nine.

While Hodges couldn’t make a putt, Swafford put together a back nine that included an eagle, five birdies and two bogeys to shoot 31 to win by two shots over Hoge.

Hodges put himself in contention with rounds of 62-72-64 heading into the final round. After his round Saturday, Hodges again said he’s undergoing an attitude adjustment on the course.

Newly married, he took the advice of his wife.

He vows to ‘have a good time out there’

“My wife kind of told me like she noticed that I wasn’t my cheery self out there,” he said. “I’m a pretty upbeat, happy kind of guy and it’s just stressful sometimes being a rookie and not knowing when you’re going to get to play and when you’re going to have to sit for a little while and that was kind of getting to me a little bit. But this week I told her I’m just going to go have a good time and see what happens.”

Hodges will try to keep momentum going later this week when he tees it up at the Farmers Insurance Open at Torrey Pines near San Diego.