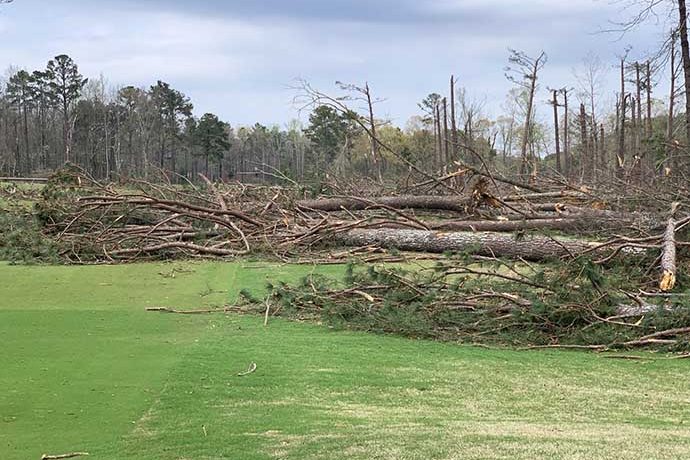 Auburn Intercollegiate Moved to the Country Club of Birmingham

Five days after a deadly tornado outbreak in Alabama struck one of the state’s iconic courses, the Shoal Creek Club continues its cleanup efforts.

Shoal Creek took a direct hit from a tornado on March 25. The twister downed trees and caused damage to the club’s infrastructure. However, there were no injuries at the course.

Also, sources said there was no damage to the course’s greens or bunkers.

The tornado damage forced the upcoming Auburn Intercollegiate men’s tournament – scheduled for April 4-6 – to move to the Country Club of Birmingham.

On Tuesday, the course released a statement regarding the tornado and its aftermath.Communities Hit

Communities Near Shoal Creek Were Hit

“As has been previously reported, parts of Alabama and Shoal Creek experienced some violent weather on Thursday afternoon, March 25. A tornado touched down in the area and hit portions of our golf course causing damage to trees and infrastructure. Winds were estimated to be in excess of 130 mph.

‘Of greatest concern is the loss of life and damage to people’s homes and property in the surrounding communities. We are grateful we had no significant injuries to our employees or members, nor anyone living in the surrounding neighborhood. Our prayers are with those dealing with the aftermath. Many have reached out and offered support and prayers.

“We are particularly grateful to the Country Club of Birmingham for standing in as host of the scheduled Auburn Intercollegiate Men’s College Golf Tournament, April 4-6. We have begun cleanup and resumed our normal maintenance practices as we are able. Our practice facilities and golf course will open for limited play on Friday, April 2.”

Shoal Creek, which hosted the 2018 U.S. Women’s Open and the 1984 and 1990 PGA Championships among others, sustained major damage to at least four holes, reports indicated.

Although tornadoes flirted with nearby Greystone Golf and Country Club and Timberline Golf Club in Calera, those two courses escaped the wrath of the storms that lashed central Alabama, killed five people and plowed a wide path of destruction.

Shoal Creek annually is listed as the No. 1 course in the state. Drone footage showed extensive damage to numerous houses in the surrounding community and also on parts of the golf course.

Reports indicate that holes 4, 5, 6, 7 received the brunt of the damage.

Before the tornado outbreak, courses in Alabama were hit with  with heavy rain in recent weeks. Earlier last week, much of the state received from between 2 to 5 inches of rain, leaving bunkers washed out and in need of repair.

More rain for much of the state was in the forecast for Wednesday.