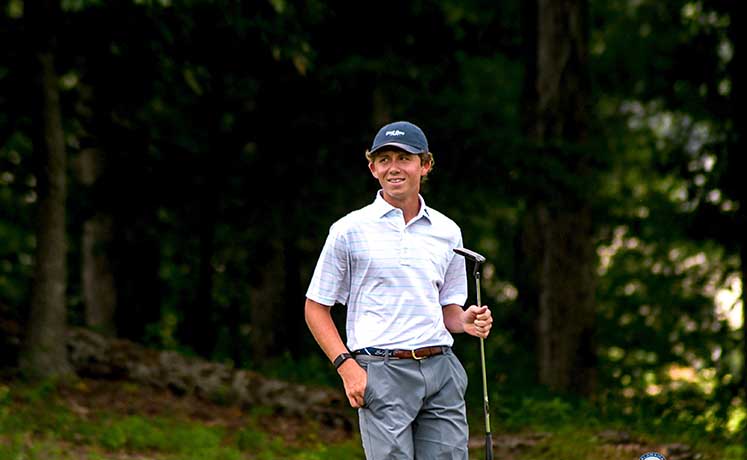 Enjoys a 4-shot Lead after Posting an 8-under 64

Drew Mathers certainly didn’t do anything wrong in the third round of the men’s Alabama Amateur Championship.

Instead, it was all about what Gordon Sargent did right

The two began Friday leading the pack by one shot starting the third round. Mathers was good, carding a 4-under-par 68. Sargent, though, blistered his way to the lead with a spot-on 8-under 64 to open a four-shot lead with 18 holes to play.

Sargent made 10 birdies during his round Friday at Saugahatchee Country Club  – five on each nine, and was at 17-under at 199 heading into Saturday’s final round.

Mathers finished Day at a respectable 13-under 203.

“I was tied for the lead with Drew coming into the day,” Sargent told the Alabama Golf Association. “I’d never played with him before, but I knew he was a great player. I knew I’d need to shoot a good score to still be in it.”

The Mountain Brook High School senior who has already committed to Vanderbilt University certainly did that, even though it wasn’t the day’s best round.

Instead, that belonged to Anniston’s Jacob LeCroy, who zoomed up the leaderboard with a 9-under 63. He’s tied with Mobile’s Noah Martino and Birmingham’s Nick Robillard at 12-under 204.

LeCroy opened the men’s Alabama Amateur Championship with rounds of 71-70 before opening the third round with five consecutive birdies. Martino has shot three consecutive rounds of 68.

Even though he’s four shots behind Sargent, Mathers is not conceding the tournament.

“Honestly, I just need to keep doing what I’m doing,” Mathers said. “I’m hitting it well, and putts just need to fall tomorrow. Hopefully that works out in the end.”

Sargent is threatening the men’s amateur scoring record of 270, set by Matt Lorenz in 2018 at Pine Tree Country Club in Birmingham.