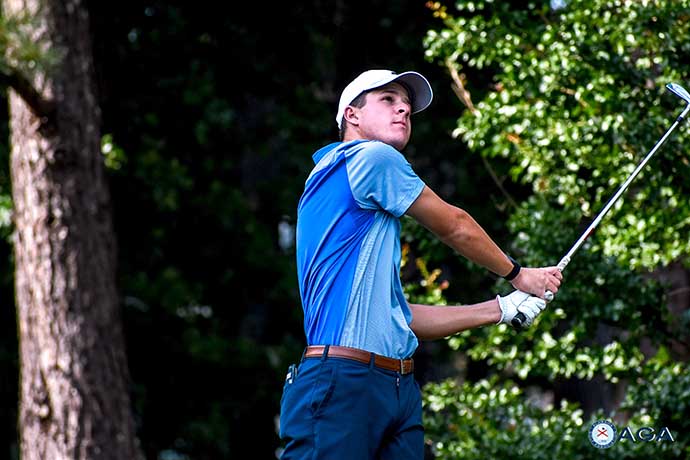 Gordon Sargent had to play 21 holes Thursday in the Alabama State Amateur, but the extra time on the the course at Saugahatchee Country Club was well worth it.

Sargent, who will be a senior at Mountain Brook High School this fall, completed his rain-shortened first round and before firing a nifty 6-under 66 in the second round to share the lead with Drew Mathers in the 104th playing of the Alabama Men’s State Amateur.

Sargent was one of 50 players who had to complete round one after heavy rain halted play Wednesday afternoon.

Sargent and Mathers each were at 9-under 135 heading into the third round of the 72-hole tournament. Mathers matched Sargent’s 66 in the second round after each shot 69 in the first round.

Sargent’s second round included six birdies and no bogeys.

“I knew that if I hit it pretty close again, I could make some putts,” Sargent told the Alabama Golf Association after completing play.

Mathers, who plays at UAB, also had six birdies and no bogeys in his round.

“I hit more fairways today than I did yesterday,” Mathers said. “I’ve just got to do that the next couple days to keep it going.”

There is not much separation atop the leaderboard, though. Birmingham’s Nick Robillard and Mobile’s Noah Martino were tied for third place at 8-under 136. Robillard rode a 65 in the second round after opening with a 71. Martino shot 68.

“Yesterday I kind of got off to a rough start, I was really timid,” Robillard said. “On the back nine, I figured it out and made three birdies coming in to post one-under. It was a huge momentum boost for me.”

Robillard’s 65 was the best round of the day.

A total of 41 players were at par or better at the halfway point. The cut fell at 147, with 61 players making it through to the final 36 holes.