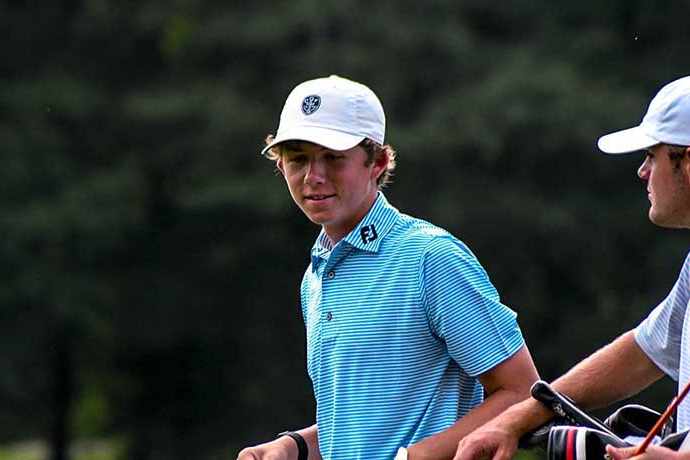 Gordon Sargent took control of the men’s Alabama Men’s State Amateur Championship with a third-round 64 to open a four-shot lead on the field.

Anybody expecting the Mountain Brook High School senior to wilt under the pressure of the final round Saturday was sadly mistaken.

Sargent, of Birmingham, backed his Friday 64 with a Saturday 65 in a record-breaking performance to win the 104th Alabama Men’s State Amateur Championship by five shots at Saugahatchee Country Club.

His 72-hole total of 24-under 264 shattered the previous tournament record by six shots. Fairhope’s Matt Lorenz shot 270 in 2018 at Pine Tree Country Club in Birmingham to set the previous mark. Just two years later, the 17-year-old Sargent put on an impressive show to establish a new record. He shot rounds of 69-66-64-65.

He is committed to Vanderbilt University.

“It’s nice to put it all together and make some birdies,” Sargent told the Alabama Golf Association. “This gives me major momentum heading into the U.S. Amateur.”

Jacob LeCroy, who started the day five shots off the lead and in third place after a sizzling 63 Friday, shot 65 in the final round but never could close the gap on Sargent.

LeCroy, of Anniston, also broke Lorenz’s scoring record by one-stroke, finishing at 19-under 269.

“You know, I was obviously coming after Gordon,” LeCroy said. “I wasn’t trying to sit back and let him take it, but he did. I broke the total, but he shattered it. He is the best golfer I’ve played with in a long time, and he’s on his way up.”

Mobile’s Drew Mathers, a UAB transfer, started the final 18 in second place, four shots behind Sargent. He closed out the tournament with a respectable 69 and finished third at 272.

“Today, there was no catching Gordon,” Mathers said. “I would’ve had to shoot 60 to beat him by one overall. Hats off to him.”