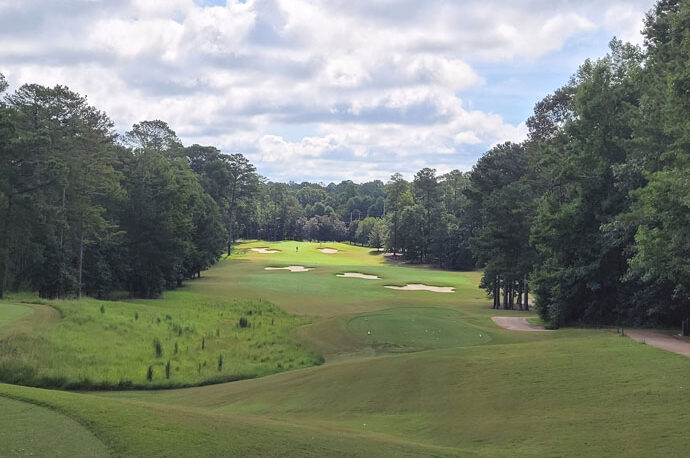 BIRMINGHAM – If you thought golf courses across the Robert Trent Jones Golf Trail seemed a little more crowded, and prime tee times were a little harder to get in 2022, that assumption would be 100 percent correct.

For a second consecutive year, the RTJ Golf Trail set records for rounds played and earnings, according to Mike Beverly, president of SunBelt Golf which operates the popular courses.

In a December interview, Beverly said the records were “phenomenal” given the renovation work of two of the Trail’s short courses and also an unanticpated shutdown of Ross Bridge.

“It’s pretty amazing to produce record numbers with renovation work going on,” he said. “We’re proud of what we have been able to accomplish.”

Beverly said the Trail is easily outperforming the national and regional industry average during these post-Covid times.

“That is a lot of people coming to the state of Alabama and a lot of support inside the state,” Beverly said.

Both local, out-of-state play up at RTJ Trail

Two factors were at work to produce those record numbers. The Trail remains a popular golf destination for visitors from outside Alabama, while an approximate 50 percent increase in Trail card sales enhanced local play at the nine properties.

Trail cards are available to Alabama residents or anyone living within 100 miles of a Robert Trent Jones Golf Trail site. They provide reduced greens fees and discounts for food and beverage and pro shop merchandise.

“Weekends are busy, particularly in the mornings,” he said. “You can’t squeeze many more (rounds) out before noon because you are already fairly booked. Weekdays, if you go from 50 to 70 rounds, that’s still not a busy day compared to a Saturday. But you start adding 20-30 rounds a day every day, it makes a huge difference on the economic impact and the success of those facilities.”

Beverly said not only are the sales of Trail cards up, but so are the number of rounds those Trail card holders are playing.

“Our goal as an industry and the Trail is how do we keep these people engaged and keep them playing golf now that some of them are going back to work and golf is not the only safe space anymore,” he said. “We are proud of the success we continue to have since things have slowly gotten back to normal.”

He also credits Dr. David Bronner, the CEO of the Retirement Systems of Alabama and the brainchild behind the creation of the Trail, for his ongoing support of what at the time was an idea ahead of its time.

“He has consistently reinvested into the properties,” Beverly said, noting that there has been a renovation project at a Trail site every year since 2005.

“We have consistently worked on improving the golf courses – re-grassing greens, redoing bunkers, fixing cart paths and bridges, things like that,” Beverly said. “A lot of golf courses have deferred maintenance and those things tend to creep up on you. When you consistently reinvest in the properties, I think that shows when the customers come to the properties each year and see that they are in good shape and our commitment to providing a good product.”

Other states have tried to copy the RTJ Golf Trail concept, which stretches from north Alabama sites at Hampton Cove (Huntsville) and The Shoals to the Mobile’s Magnolia Grove (Mobile) to the south, but have not been able to duplicate what was at the time the most massive public golf project in history. The difference, according to Beverly, is that while the RTJ Golf Trail is a single entity, other trails have tried to incorporate different courses with different ownerships into a cohesive grouping.

“What they end up with is a marketing co-op effort to become a trail,” he said. “A lot of them have different owners and you have different levels of commitment to the properties, the staffing, the training, the product itself.”

The original RTJ Golf Trail featured seven sites that opened between 1992-1993. Ross Bridge in Hoover and the Shoals were added in 2004. All featured original designs. Lakewood was added later under the trail umbrella.

Being under one ownership/management group ensures the consistency of the product, Beverly said.

“From our aspect, it is set up for success from the beginning,” he said.

An adept marketing strategy also keeps the RTJ Golf Trail in front of its target audience. Beverly said the Trail has gotten “more modern” in its approach from a digital aspect because of its consumer data collection.

“Knowing who our customers are,” he said. “We know our golfers who have played the Trail or match a customer profile. We are much more efficient in what we do.”

A partnership with Gray Media, a company with a vast array of television stations across the country, helps spread the word about the RTJ Golf Trail. Trail officials also have fostered relationships with tourism bureaus and are regular attendees at golf shows across the country.

Beverly notes that again in 2022 the Trail got play from all 50 states and 24 countries.

The Trail isn’t resting on its laurels. Beverly is aware that the surge of golf’s popularity could slow at any time. He said the Trail plans to continue its marketing strategy to ensure future success. Also, the Trail should get a boost when Ross Bridge is expected to re-open sometime in mid-September or early October after undergoing renovations after greens were damaged by an incorrect chemical application. While re-doing the greens, other improvements will also be made.

Beverly said the greens mishap at the 18-year-old Ross Bridge expedited renovations that were originally planned for 2024 or 2025.

“As opposed to closing a few years later for a second time, we are going to go ahead and renovate the bunkers,” Beverly said. “We’ll reshape some bunkers, work on approaches – new collars, new greens. Move a few cart paths, some of cart paths pretty far away from the fairway.”

The goal, he said, is to make Ross Bridge a little more player-friendly on some holes that feature long or severely uphill walks.

“By the time we reopen, it’s going to be better than it ever has been,” he said. “Then it will be set for another 20 years of great golf at Ross Bridge.”

He’s also excited about the Trail’s recent re-do of the Short Course at Oxmoor Valley. The formerly massive 147-acre 18-hole par-3 course was downsized into a fun, 9-hole short course with no hole longer than 132 yards. Appropriately named “The Back Yard,” it is modeled after Pinehurst’s “Cradle” and Pebble Beach’s “The Hay.”

“It’s nothing like anyone from a public perspective has in the state of Alabama,” Beverly said. It’s a different product than anything we have ever had on the Trail.”

PrevPrevious Article4 repeat as AGA Players of the Year
Next ArticleMyrtle Beach golf: What’s new in 2023Next