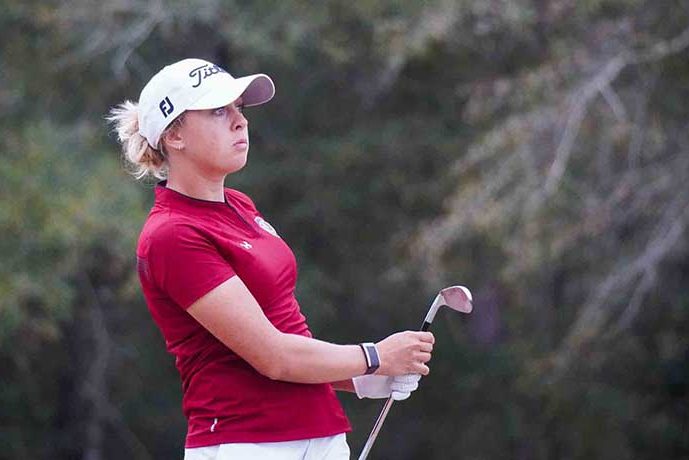 Those two rounds earned her medalist honors in the four-day, 72-hole event that served as the first four rounds of the eight-round Q-Series in which players can earn LPGA Tour playing status for the 2022 season.

Roussin-Bouchard fashioned a 5-under 66 on the par-71 Falls Course on Saturday that put her atop the leaderboard heading into Sunday’s final round, where she finished with a 7-under round of 65 on the par-72 Crossings Course.

She found herself tied with eventual runner-up Hye-Jin Choi at 16-under overall heading to the par 3 14th hole, but quickly separated herself with birdies at 14, the par-4 15th hole and the par 5 16th; Choi made par at each of the three holes, though she would add a birdie at 17 to finish 17-under, two shots behind Roussin-Bouchard’s 19-under scorecard.

Roussin-Bouchard had earlier rounds of 69 and 67, improving her score each of the four days.

Roussin-Bouchard: ‘Messing around’ with word games kept her loose during final round

“I don’t know,” she said when asked how she managed to produce such a strong round on Sunday. “We (she and her caddie) were just messing around on the course doing very stupid games with words and science. I wasn’t really thinking about things while we were playing. I was thinking maybe we should play this a little bit more; stick to our game plan and hit as many greens in regulation as we could. I don’t know, we were just having fun and I suddenly realized, oh, I’m seven under. I didn’t realize it.

“The goal is to play at 18-under all the time and even less if I could. Just play smart and play aggressively in a smart way. That’s how I try to do it. We had a couple of wedges into the green and I ended up being very close to the pin with the wedges and even with longer irons. Obviously, my game was good on a whole.”

Roussin-Bouchard said she hopes her good vibes and solid game travel with her to the last stage of play this week at Highland Oaks, the Robert Trent Golf Trail course in Dothan.

The Mobile tournament featured more than 120 golfers. The top 70 and ties, a total of 74 golfers, earned a spot in the final stage event in Dothan this week, slated Thursday through Sunday. From that group, the top 45 and ties will earn LPGA Tour status, with the remaining golfers earning status on the Symetra Tour.

Sunday’s best round belonged to Australian Stephanie Kyriacou, who carded a bogey-free 9-under 63 on the Crossings Course.

“I have no idea,” Kyriacou said as to how she put things together on Sunday. “I think everything just clicked. Over the last couple of days some things were working and some things weren’t and then today they just came together. That helps. It was very, very enjoyable today.

“I think everything was just working. Even in the practice rounds I found this course (Crossings) a bit easier than the other one. I had a good round on the other one (Falls on Saturday) and I said, ‘Yeah, let’s go low (Sunday).’ It was just a really good day.”

Kyriacou tied for fourth with Atthaya Thitikul, both at 13-under for the tournament. Na Rin An was third at 14-under after shooting a final round 66.

Among the golfers headed to Dothan is Huntsville’s Janie Jackson. The former Alabama standout started the day at 4-under for the tournament and finished at 7-under. With five birdies and no bogeys on the front nine on the Crossings Course on Sunday she reached 9-under for the tournament with bogeys at 10, 12, a birdie at 13 and another bogey at 18 left her at 7-under, which was good for a tie for 19th place.

“Another steady day of ball-striking,” Jackson said of her day. “My bogeys were an errant tee shot on 10 and a three-putt here on 18; you can’t leave yourself above the hole out here and I did. But steady golf this week, so I’m pleased with it.”

She now heads to Dothan, where she hasn’t played competitively previously, in hopes of continuing her good play and earning LPGA Tour status for the upcoming season.

“I went to play the course in Dothan about three weeks ago, and that was the first time I’d seen it,” she said. “The main thing is to rest up. I’ll probably have a light practice (Monday) and make sure I don’t get burned out and keep my head up and keep steady.

“Mostly, just knowing that my game is in a solid place is the best thing. My ball-striking is going well and I worked on some things with my coach last week and the adjustments feel good. I’ve just got to make sure to keep fine-tuning those things and make sure my ball-striking sticks with me and keep on staying patient.”

Jackson wasn’t ready to make any predictions about Dothan and her chances to earn LPGA Tour status. She said there’s a lot of golf still to be played.

“I always have to believe in myself. My game feels good,” she said.” I’ve still got to play four more rounds of golf; I’ve got to earn it. So I just have to stay positive with myself and stay patient.”