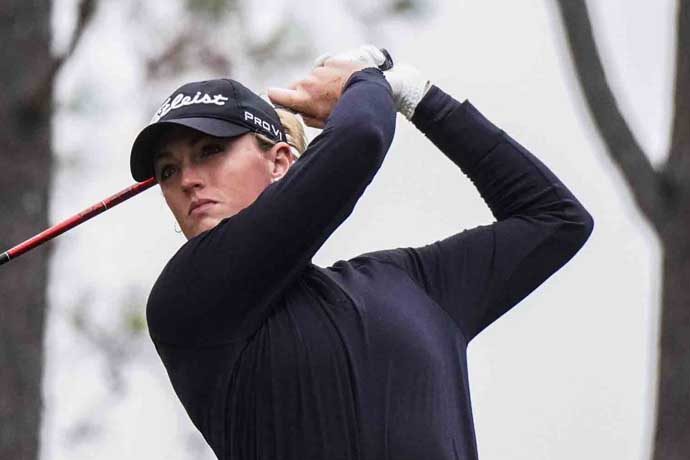 Huntsville, Alabama, native Janie Jackson is no stranger to the LPGA Tour. After all, she made her first appearance on the top women’s professional golf tour way back in 2011 at the Navistar Classic in Montgomery when she was just 16.

After winning once and finishing in the top five on the Symetra Tour money list in 2020, Janie Jackson earned limited status on the LPGA Tour for 2021 where she made eight starts.

In those starts, the 27-year-old former University of Alabama women’s golf standout earned approximately $42,000. The rest of her season was spent on the Symetra Tour, where she notched a second victory.

An otherwise solid year for Jackson turned into a great one Sunday when Jackson earned fulltime LPGA Tour status for 2022 courtesy of a sixth-place finish in the grueling eight-round qualifying school tournament. The event spanned two weeks at two different sites in south Alabama.

She easily made the 72-hole cut after the first four rounds at the Robert Trent Jones Golf Trail’s Magnolia Grove facility.

A hole-in-one for Janie Jackson

From there, Jackson played her way up the leaderboard, capped by a closing 3-under-par 69 at Dothan’s RTJ Golf Trail’s Highland Oaks course. JJackson’s 555 total for eight rounds was well off Na Rin An’s winning score of 541, but the goal from the start for Jackson was to get her tour card. And she did that with ease, as the top 45 and ties advanced to the LPGA Tour.

Jackson told the Dothan Eagle that she was confident going into the final two stages of qualifying school.

“I knew coming into it if I could sort of ease the pressure on myself and just realize whatever is meant to happen will happen; whenever it’s my time to make it, it will come,” Jackson told the newspaper.

“I put the prep work in, so I wasn’t going to come out here and try and force low scores every day. I was just going to try and play steady golf and that’s what I’ve done.”

In the fifth round of the LPGA Q Series, which was the first day in Dothan, Jackson made a hole-in-one on No. 4 at Highland Oaks. The par-3 played 129 yards and Jackson used a pitching wedge for the ace, the highlight of her 4-under, 68 effort.

“It was 130. I took a little bit off it. I liked the ball flight. It was low, just held its line perfectly. Landed a couple paces behind the pin and rolled back in,” Jackson told LPGA.com. “It was a good shot, but you never know until it actually drops.”

It was the second hole in one for Jackson this year, who also made an ace at the 2021 Carlisle Golf Classic, a Symetra Tour event.

“I had never even had a hole in one until March earlier this year, and now I’ve had my second,” she said. “It’s kind of cool. Got a high five from everybody in the group. It’s always nice to be able to walk up to the green without a putter in your hand. It was a fun feeling.”

This time last year, Jackson had earned limited status and was about to undergo wrist surgery that sidelined her for a couple of months.

Now, after two strong weeks at two of the top Robert Trent Jones Golf Trail sites in Alabama, Jackson is ready to move on to bigger and better things.

Photo courtesy of the LPA Tour