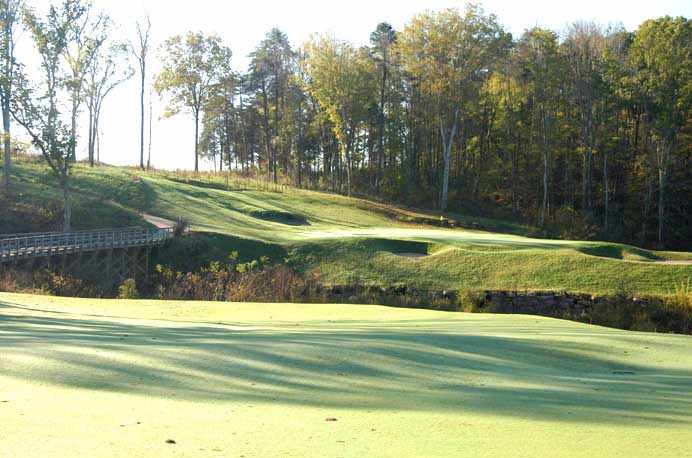 Plans are in place and work is proceeding in an effort to reopen Ross Creek Landing Golf Course, one of the original Bear Trace golf courses.

Business partners Fred Gillham and Tommy Tinin confirmed recently they hope to have Ross Creek open by September. The course, one of five built by the State of Tennessee and designed by Jack Nicklaus, opened in 2001 and closed in 2013.

Before it closed, it was largely considered the best of the Bear Trace courses and earned numerous honors, including being named Tennessee’s No. 1 public course by Golfweek. Hardly 40 miles north of the state line, it had been popular with Northern Alabama golfers.

If it does reopen, it will not be considered one of the current Bear Trace courses operated by the state.

Ross Creek Landing: A Bit Off the Beaten Path

The course’s out-of-the-way location and the golf industry’s stagnation were the primary reasons for the closure. Affordable pricing and a fun, challenging layout led to rave reviews by most players.

Gillham and Tinin are seeking help from the City of Clifton and the Wayne County (Tennessee) commission in the form of tax abatements they say will help them get the course open.

Tinin said there is about a “90” percent chance the course will re-open as soon as September.

Tinin said the course’s front nine is in relatively good shape, pointing out they kept it mowed. The back nine was left mostly unkempt during the closure.

“We kept the front nine sprayed and mowed,” he said. “If you drive by, it looks like we are still open. The back nine will take a little more work to get it open. The bunkers, there’s not a lot to do with them. Mostly we have to shape them back up a little. We don’t have to do any dirt work.”

According to Tinin, the biggest project will be renovating the greens, which were sprayed recently to kill weeds. He said the plan is to replace what once were bentgrass greens with a more heat-tolerant Bermuda grass.

The rustic clubhouse at Ross Creek Landing, a modest structure that featured a grill and golf shop, has been maintained throughout the closure, hosting events such as wine tastings and parties.

The property also features four cabins that can accommodate up to 12 people each, Tinin said.

Gillham said he bought the course from the state for $2 million. He kept it open for three years before closing the doors in 2013.

Why are they trying to re-open now? Tinin said plans were beginning to take shape before the coronavirus pandemic hit.

“We just didn’t think the timing was right until now,” he said. “The economy was doing good and play was picking up at other courses. Then COVID-19 hit.”

The only other course in Wayne County is Waynesboro Municipal.