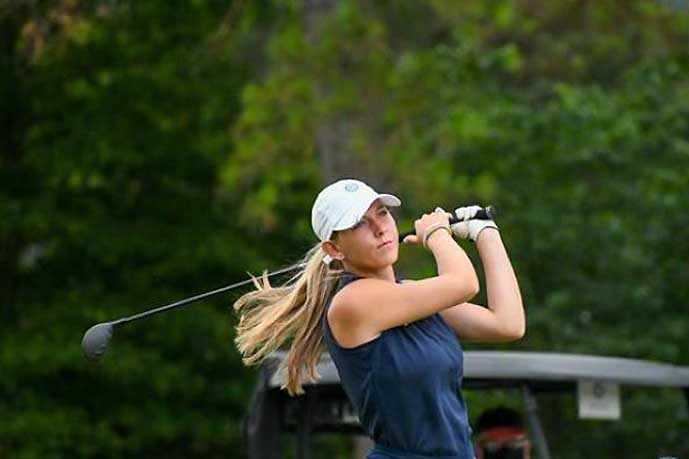 Playing in breezy conditions at Valley Hill Country Club in Huntsville, Emilia Smith grabbed a one-shot lead after the first round of the 2020 Alabama Girls State Junior Championship Monday.

Smith, of Enterprise, Ala., shot even par over the opening 18 holes to take a one-shot lead over pre-tourney favorite Michaela Morard and Pike Road’s Emma Pittman, who carded matching 73s.

All three of the leaders are recent high school graduates. Smith is headed to UAB for her college career, while Huntsville’s Morard is a University of Alabama signee. Pittman has signed with Lee University.

Junior Lauren Thompson, of Midland City, shot 76 and is alone in fourth place. Six players shot 78 and four more were at 79 heading into the second round.

Fifty-seven players are competing in the 57th playing of the Alabama Girls State Junior Championship.

“It was just a solid day,” Smith said of her round at Valley Hill, a 27-hole course on Huntsville’s south side. “I was focusing on playing the shot at hand and playing my best.”

Morard, who capped a stellar prep career at Randolph School, is the defending champion and has accumulated a laundry list of awards throughout her junior career. She is a four-time AJGA Rolex all-American and owns three Alabama High School Athletic Association individual championships. She was denied the opportunity to win a fourth in May when all high school sports activities were shut down because of the coronavirus pandemic.

The tournament is a 54-hole event and concludes Wednesday.

Christina Chang of Auburn shot one-under 71 to take the first-round lead in the 36-hole Girls 13 and Under Junior Championship. She leads Birmingham’s Scarlett Schremmer by nine shots heading into the final round.

Featured image caption: One of 57 players tees off at Huntsville’s Valley Hill Country Club in the first round of the Alabama Golf Association’s Girls State Junior Championship. [Photo courtesy AGA]