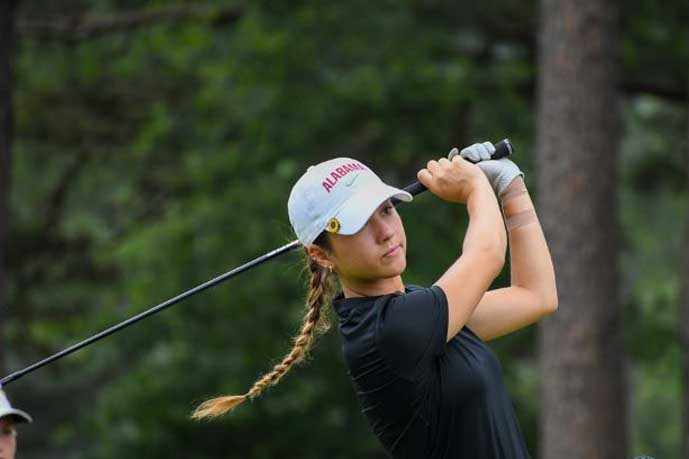 There was a shakeup on the leaderboard after the second round of the Alabama Girls State Junior Championship on Tuesday at Huntsville’s Valley Hill Country Club.

Pre-tournament favorite Michaela Morard moved into position to claim the lead after Day 2 of the Alabama Girls State Junior Championship, shooting one-under-par 71. That gives the recent Randolph School graduate a two-round total of even-par 144 with one round remaining in the 54-hole event.

Morard is seeking her fifth girls junior championship. With a victory, she would become the state’s all-time leader in Alabama Girls State Junior titles. Morard won her first girls state junior title in 2015 and added wins in 2017, 2018 and 2019.

Martha Lang, who won four straight title between 1967-70, is tied with Morard for most titles in Alabama Golf Association history.

Huntsville’s Morard, who also has three AHSAA individual titles to her credit, takes a four-shot lead into the final round over Pike Road’s Emma Pittman (73-75), who is at 148 after 36 holes.

There is a two-way tie for third place at 150 between Enterprise’s Ashley-Sinclair Lewis, who shot 72 in the second round, and Midland City’s Lauren Thompson, who shot 150.

First-round leader Emilia Smith followed her opening 72 with an 81 and fell into fifth place.

“Overall, it was a pretty good day, and I really enjoyed the people I played with,” Morard said.

One champion was crowned Tuesday at Valley Hill CC, as Christine Chang of Auburn captured the inaugural Alabama State Girls 13 & Under Junior Championship. Chang opened with a 71 in the first round and cruised home with a 79 in the second round for a two-round total of 150.

Birmingham’s Scarlett Schremmer shot 84 in the second round and finished second at 164. Hoover’s Cameron Britt shot 85 and finished at 174.