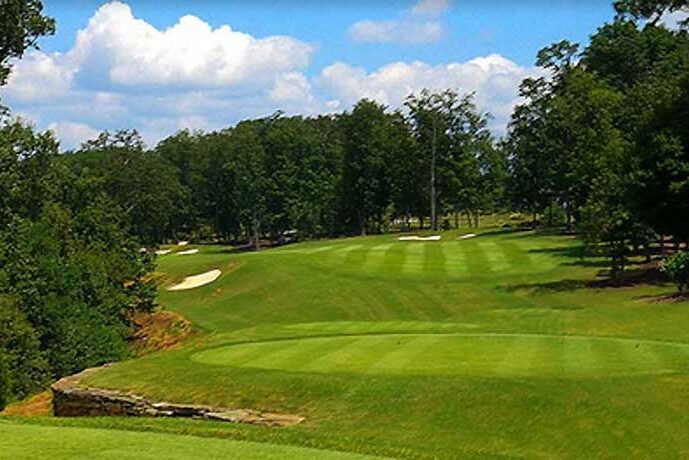 His appearance at Huntsville Championship is a homecoming of sorts

This week’s Huntsville Championship Korn Ferry Tour event isn’t an actual home game for Rogersville native Conner Godsey, but it will sure have a feel of being home about it.

Godsey, in his second stint on the Korn Ferry Tour after regaining his status thanks in part to a win on the PGA Tour Latino America in 2021, is familiar with the tournament site – The Ledges – and he’ll be setting up shop at his sister’s house for the week.

Perhaps a comfortable setting will spark a surge for the Lauderdale County High School and University of North Alabama graduate who has seen mixed results so far in the 2022 season.

“It will be a lot of fun,” he said while playing in the recent KFT stop in Lake Charles, Louisiana. “My sister Britney lives 20 minutes from The Ledges and I will stay with her and husband and their 2- and 4-year-olds. It will be a really fun week.”

Godsey is looking forward to seeing some friendly faces in the crowd, too, as the tour hits a stretch of three nearby tournaments to the region. After the Huntsville Championship the Korn Ferry Tour heads to Nashville for the Simmons Bank Open and then to Knoxville.

“Just to have a lot of family come out will be nice,” he said. “My parents will probably go to all three of those. That will be a fun stretch to see everybody and have some fun out there.”

Although he is from Rogersville, which is about 40 miles from Huntsville, Godsey doesn’t have in intimate knowledge of The Ledges but he has played it on several occasions.

“I like The Ledges,” he said. “The greens, with the mountain effect, it’s tricky to read the putts.”

Godsey said one thing he and the other KFT players like about the Huntsville stop is that The Ledges doesn’t produce extremely low numbers. The winning score at many of the KFT events often is 20-under or lower. Paul Barjon won last year’s Huntsville Championship at 15-under par 265. He eagled the third hole of a playoff to capture his first KFT win and graduate to the PGA Tour. As a result. Barjon will not defend his title.

“It’s a fun course and it’s pretty tough,” Godsey said. “Scores aren’t real low, which everyone really likes when the course is a little tougher because there are so many courses out here where the winning score is 25-under. Whenever we get a course that is a little tougher it’s fun.”

Hoping to bring consistency to his play at the Huntsville Championship

The 30-year-old Godsey is looking for more consistency as the season progresses. So far, he has made 4 of 9 cuts and ranks 147th on the KFT points list. His scoring average is 71.37, but twice he’s twice shot 65 in the first round of a tournament. So, it’s just a matter of stringing four good rounds together.

Godsey made it through a Monday qualifier at last year’s Huntsville Championship but failed to make the cut. Even though he had one full-time stint on the KFT in 2018, Godsey said he is more at ease the second time around.

Godsey, who now works with former PGA Tour player Grant Waite, said he is a better player now than on his first stint on the Korn Ferry Tour. He said he is more comfortable now on a big stage, crediting that in part to his breakthrough win on the Latin American tour last year. Another part of that is being more consistent throughout his game.

“Honestly, everything is better,” he said. “I drive it better and I putt more consistently. I would have good days of putting back then. But I’m way more consistent now. I generally seem to always make some putts now. The driver, I could have some big misses, but the misses are more narrow now.”

Conner Godsey: ‘I was lost’ in finding his swing

He credits Waite, who is based in Orlando, with helping in that regard. After 2018, Godsey decided he needed to make some swing changes. He struggled with the changes and eventually found his way to Waite.

“I went all in to what I was doing and I got to a certain spot to where I was lost,” he admits. “I was trying to technically get my swing into a better spot to be more consistent.

“There are a ton of different ways to do it, but for me I made a couple of big changes to my backswing. It got me into a very unfamiliar spot and I didn’t know where the clubhead was or the clubface was, and I had no control,” he added.

The Covid shutdown actually proved beneficial, Godsey said. Instead of grinding away making changes while trying to get results in tournament play, he could work on his game free of pressure.

“Going through all of that, learning through the year of the struggles, I learned I don’t need to make some total overhaul to my game and my swing,” Godsey said. “I’m learning that steady progress to inch my way out of it was all I needed to do. It’s gotten me to a good spot. Since then, it has been a process of making subtle changes and eventually getting into a spot to where now it seems pretty consistent.”

Godsey is happy to be back on the Korn Ferry Tour, but he’s not content. The goal is to play well enough to get to the next level – the PGA Tour.

“I’m super glad to be back, but the end goal is to play PGA Tour year in and year out. I want to have a good career and win out there. So, this is definitely a step in the right direction.”