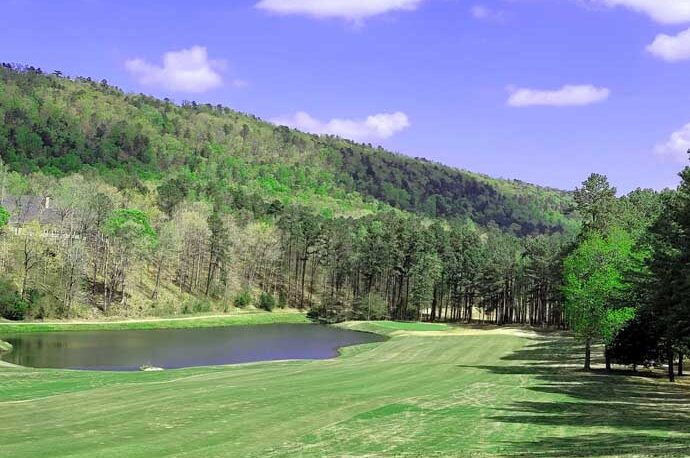 ONEONTA, Ala. – When it opened in 1999, Limestone Springs Golf Club immediately climbed to the top of the list of must-play golf courses in Alabama.

The par-72 Jerry Pate design, set against a scenic backdrop of the southern tip of the Appalachian Mountains, quickly ascended to the No. 1 course ranking in the state. It spent more than 10 years among the top 5 and top 10 course rankings lists of the best courses in the Alabama, and it was also on Golf Digest’s top 100 courses you can play.

Gradually, though, Limestone Springs fell out of favor because of ownership and management changes at a time the golf industry suffered a severe downturn. Conditions deteriorated and Limstone Springs became just a hint of what it once was. Its future was left in doubt when then-owner, Warrior Custome Golf, filed for bankruptcy in 2019.

Enter Russell Boren Sr., a resident of the Limestone Springs community and owner of Boren’s Companies Inc., who also has a grandson who plays high school golf at nearby Oneonta High School.

Boren, 90 years old but with the energy of someone younger, purchased the course from Warrior and set in motion the extensive renovation project currently underway.

“Somebody had to buy it,” Boren said on a recent April afternoon while sitting in the clubhouse. “Otherwise, it would have become a cow pasture if I didn’t buy it.”

These days, talk around the golf shop isn’t how Boren rescued the course from oblivion. Instead, it’s about the anticipation of when the course will reopen and the potential of a return by Limestone Springs to what members consider its rightful place among Alabama’s best golf courses – public or private.

Limestone Springs to reopen this summer

To answer the first question – when will the course reopen? There is no firm date but sometime this summer is the general consensus. Mark Langner, who is overseeing the renovations, is adamant it won’t open too early.

“When it’s ready,” he said. “Ideally early summer, but the last thing you want to do is set yourself up for failure.”

A new director of golf is on the way and a new food and beverage director has been hired. A search is underway for a new superintendent.

Limestone Springs was considered a Jerry Pate masterpiece when it opened. It plays to modest 6,987 yards from the tips with a rating of 74.2 and slope of 137. The course weaves its way through hills and forests of hardwoods and pines, and elevation changes are ever-present. Each nine features a risk-reward short par 4, and its set of four par 3s are among the strongest in the state.

Boren took possession of the course in January 2021 and he immediately set about fixing the course’s infrastructure. He brought back Langner, the original superintendent when the course opened, to oversee an extensive restoration that includes tree removal, new bentgrass greens, re-grsssing several tees and reworking bunkers.

Langner, who owns the Birmingham-based Professional Turfgrass Services, is well-known in the industry, having worked at Shoal Creek, Farmlinks and the Country Club of Birmingham after he opened Limestone Springs He got his first job in the business after serving as the caddie for Buddy Alexander’s U.S. Amateur victory in 1986 at Shoal Creek.

Langner also has more than just a passing interest on making sure everything is done just right – his mother lives on the 18th hole.

The original plan, Langner said, was to put a “Band-Aid” on Limestone Springs to get it functioning and then work toward a long-term renovation. But when goose grass got into the original bentgrass greens, it was decided to renovate all the greens. After scraping the surface of the greens, they were seeded with 007XL bentgrass. As of April 12, the greens were about 95 percent covered with the new grass. Only a spring deluge that dumped more than six inches of rain on the course kept the greens from being at nearly 100 percent complete.

“A golf course. if it is not maintained. will get away from you quickly,” Langner said. “And this property, being down in the valley with the hills and the trees with 20-plus years of tree growth, anything and everything was working against them trying to maintain it as a quality facility.”

Limestone Springs was built at a cost of more than $20 million. The renovations are a multi-million dollar project, and Boren has been alongside Langner every step of the way.

“It has been a big undertaking,” Langner said. “At 90 Mr. Boren, he’s up and at them every morning and right out there, engaged and involved in it.  It’s been fun to watch him learn and be able to see what we see as agronomists.

“I learned pretty quickly that his commitment – he wants to understand what he is doing and why he is doing it – and then he’s committed to it,” Langner continued. “That’s the only thing that has kept me engaged because I know we are going to get over the finish line and have that top golf course in the state of Alabama.”

Langner estimates that more than 1,500 trees have already been removed with another 1,500 to go. Because the course sits in a valley and is heavily shaded, he said it was important to create airflow and to get more sunlight onto the turf.

During a tour of the course, Woody Eubanks, a member who has lived in the Limestone Springs community for 18 years and is one of the state’s best amateur players, pointed out how different the course looks visually as trees have been removed. There is an excitement in his voice when he talks about the changes the course is undergoing.

Much of the infrastructure work was already complete when Langner arrived. The pump station and the irrigation system were renovated. That left him to focus on other projects.

Langner said every big project at first glance appears daunting, and Limestone Springs was no different.

“You have to remind yourself you can’t eat the elephant in a single setting; you have to eat it one bite at a time,” he said. “While there are a lot of moving parts and there is a lot going on, you have to take it one day at a time. When you look back on it after 30, 60, 90 days, you see all the puzzle starting to come together.”

Tees and fairways will remain Bermuda grass, while the greens collars will feature  3 to 6 foot of Zoysia grass. That will prevent the Bermuda grass from invading the bentgrass greens.

As tree removal, tee and bunker work continues, Langner said there was an emphasis on the centerline of each hole.

Boren’s goal: getting Limestone Springs back into Alabama’s top tier

Boren knew the original owners, who bought the property from U.S. Steel.

“They didn’t spare anything when they built this thing and they spent a ton to make it go,” he said. “At the end of the first year it was No. 1 in state. If we can get if fixed up, we can get back – we might not be No. 1 – but we are striving to get in that area.”

For Limestone Springs member Steve Patrick, who has been involved in the hiring process and is an unofficial spokesman for the course, seeing the transformation to what the course once was in its early days, Boren’s words are music to his ears.

“I’ve seen it good and I have seen it not so good,” said Patrick, who is an NFL referee. “The biggest thing I want to get out of this is to be able to step out on my back porch and say I had just a little bit to do with it. My goal for this place is just to see it get back to all the potential that it has. Thank goodness Mr. Boren lived here in the neighborhood and has a grandson that plays golf.”