Looking for a challenge? Take on RTJ Silver Lakes 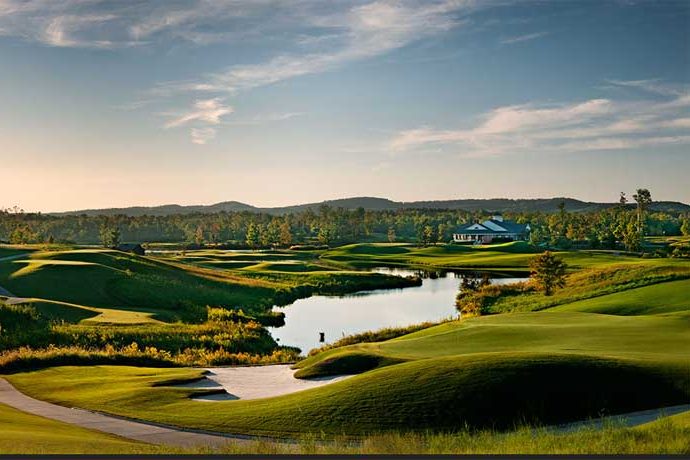 RTJ Silver Lakes: Where hard and punishing can translate into fun golf

The first thing you need to know about the RTJ Silver Lakes facility is that the golf courses are hard.

Hard, as in you better bring your A game for approach shots.

Hard, as in you better bring your A-plus game for chipping, pitching, bunker shots and putting if you even want to think about a good score.

Otherwise, you’ll head home shell-shocked and wondering on the drive home what the heck happened during the previous four-plus hours on courses, located in rural north-central Alabama halfway between Anniston and Gadsden.

RTJ Silver Lakes is one of the trail’s original sites. It was the seventh facility to open and it features three nine-hole championship courses and a nine-hole short course, nestled in the Appalachian Foothills.

The RTJ Silver Lakes courses have six sets of tees, with the black tees ranging from 3,642 yards (Mindbreaker) to 3,849 (Backbreaker). From the orange tees, the yardages are a more playable 3,335 (Heartbreaker), 3,198 (Backbreaker) and 3,199 (Mindbreaker). But don’t be fooled by the scorecard yardage. All three seemingly play longer because of the constant elevation changes. Often, you will be driving into upslopes, killing any roll.

And all three of them will beat you up, which is great – if you like that kind of thing.

What exactly does being among that first group of original Robert Trent Jones Golf Trail sites mean? It means the fairways are generally wide, the smattering of bunkers difficult and the expansive Champion ultradwarf grass greens impossible to figure out when approach shots are not placed in the proper section.

The Heartbreaker and Backbreaker nines are similar in that lead designer Roger Rulewich took advantage of the hilly terrain – the courses offer panoramic views of the nearby Appalachians – to create a series of holes with extreme elevation changes. It’s rare to find a flat lie at Silver Lakes.

The first hole on the Backbreaker course is typical of what’s to come – a long (406 yards from the orange tees), uphill par-4 that plays to a large green with a deep bunker protecting the front. Depending on wind direction, the uphill second shot plays at a minimum of one club more and at times two clubs more.

AtRTJ  Silver Lakes, playing the ball along the ground into the green is rarely an option. Although the greens are huge, all three courses put a premium on accurate  approach shots – getting the ball onto the proper section of the greens is paramount. Players can use the extreme slopes to their advantage, but slight mis-hits can end up with twisting, multi-breaking putts.

Many of the greens feature steep drop-offs around the greens. Errant approaches that come up short or off line result in difficult pitches and chips.

RTJ Silver Lakes was rebuilt after a devastating 2011 tornado

In April 2011, Silver Lakes took a direct hit from an EF-4 tornado, one of approximately 60 that struck the state leaving a trail of death and destruction in their wake. The course lost 38,000 trees and high winds did extensive damage to the maintenance and pump buildings and irrigation system. It also tore up many of the cart paths.

Rulewich and his team came in and did extensive renovations. If there was anything good to come out of the tornado, it’s that the loss of so many trees opened up the the three nines and provided some spectacular views across the entire facility.

One thing Rulewich didn’t do, though, was soften the greens complexes. They remain as challenging today as when the course first opened in 1993.

That’s not to say that playing golf at Silver Lakes isn’t fun. The key is to embrace the challenge it offers and to take the bad in stride. You will three-putt. You will face exceedingly difficult pitch and bunker shots. You will likely get tired of trying to judge uphill second shots.

In short, RTJ Silver Lakes is exactly what Dr. David Bronner had in mind when he came up with the idea for the Robert Trent Jones Golf Trail. He wanted the golf courses to be hard. He wanted visitors to return home and tell their friends about the challenge and the difficulty the Trail presented.

RTJ Silver Lakes is exactly that – tough and challenging, but worth a return trip to try to tame Mindbreaker, Heartbreaker and Backbreaker.