Reagan Cink on Dad’s Bag at The Masters 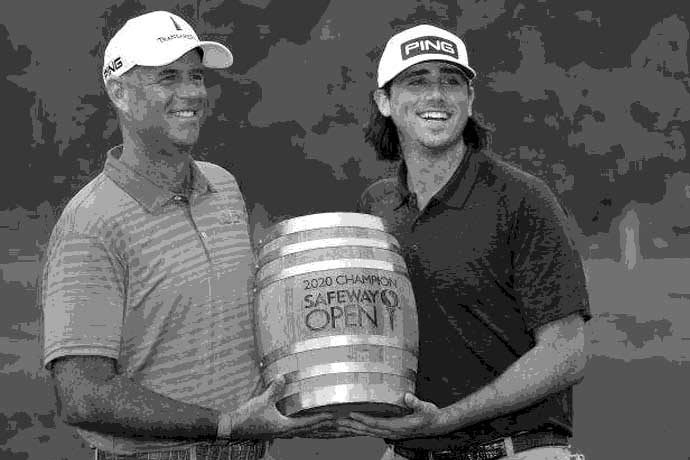 One of the feel-good golf stories from 2020 came in early September in California’s Napa Valley as a 47-year-old PGA Tour veteran was trying to hang on and win for the first time since 2009 with Reagan Cink, a new caddie, on his bag.

While the caddie was new, he was an all-to-familiar face for Stewart Cink. In fact, you could say that this caddie-player relationship was nearly 25 years in the making. In 1997, Stewart Cink was competing in his first Masters when Reagan Cink arrived in Augusta just one day after arriving in the world.

As the Safeway Open in Napa came down the final stretch, television cameras often zoomed into Stewart Cink and Reagan Cink, discussing the shot at hand.

When Stewart birdied the par-5 finishing hole to snap an 11-year winless drought, the victory celebration, including wife Lisa and caddie/son Reagan, was on.

Reagan Cink on the Bag is ‘Not a Ceremonial Family Caddie’

The pair have clicked so well together that Reagan Cink will stay on his dad’s bag for the remainder of the year. The Georgia Tech grad even put a potential career-starting job with Delta Airlines on hold to trudge down the fairways – and sometimes into the rough – with his dad.

Stewart, though, is quick to point out that he isn’t just doing it as a favor to Reagan. Reagan, he says, has earned his trust as a caddie.

“Reagan as my caddie has been a fun boost,” he said. “He’s been doing a great job, He’s not a ceremonial family caddie. He could caddie for anybody out there on tour right now.”

Like most players who have been out on the PGA Tour for a long time, Stewart has had his share of caddies. There’s a different dynamic with his son by his side, though.

“The biggest thing is that he loves golf,” he said. “All those guys love golf who have caddied for me. There’s not one guy who has caddied for me – I’ve had about seven – there’s not one that I am not good friends with. That’s one of my most proud achievements in golf because that’s not the case for a lot of people. I still have good relationships with all my former caddies and coaches.”

But he said it’s just different vibe with Reagan. Part of the dynamic that works so well for them is that they are frequent playing companions when not out on tour. Reagan is an accomplished golfer – a scratch player according to Stewart – but he never took to the game full-time, opting instead for other sports like hockey.

“His other sports kept him from being a one-trick pony like me, thankfully,” Stewart joked. “He thinks the way I think, so there are zero conflicts when it comes to shot making or planning our strategy on a hole. We come to the same conclusions and I can trust that. If I am in between clubs or doubting something, he will usually come with a piece of information that I would eventually have come up with. It just takes us less time. He sees shots the way I see them.”

With previous caddies, Stewart said there always has been a measure of conflict.

“That’s always something I have had with my other caddies – a little bit of that conflict,” he said. “How aggressive should I be on this shot? A lot of times I would think I shouldn’t be that aggressive and my caddie would be like ‘Take dead aim.’ That’s a conflict. It inhibits your ability to really be freed up and just flat out pull the trigger and go.”

Reagan Cink Being on the Same Page is Important, Dad Says

That’s not the case with Reagan on the bag.

That they are on the same page on every shot isn’t coincidental. It was borne out during their frequent father-son games back home in Duluth, Georgia. Those games ramped up quite a bit during last year’s tour hiatus due to the Covid-19 pandemic.

“I played with him when he was 8, when he was 14 and when he was 18,” Stewart said. “Now he is an adult and his thinking is so mature. When we play golf together, we basically we caddie for each other. We have these games we play and we can use. We can tee off at 10 a.m. on a Saturday when the tee sheet is full and we play games that keep us on pace with the slow foursome ahead of us but also in front of the slow foursome behind us. We do extra things on the course – talking through his shots and talking through my shots. We’re always going back and forth.”

For the most part, the results have been good except for a recent stretch of three straight missed cuts. With Reagan on the bag, Cink has had five top-20 finishes, including the win and a tie for fourth in Bermuda.

That good stretch of play has helped Reagan’s bank account, too. Dad pays son the standard caddie fee minus a little bit since Reagan doesn’t have the normal expenses for lodging and meals while toting Stewart’s bag. He stays with his mom and dad.

Stewart, making his 19th start at The Masters, has spent the week schooling Reagan on the many nuances of Augusta National. They’re teeing it up early Thursday with past champion Ian Woosnam and Jim Herman, hoping to make a few more memories along the way.