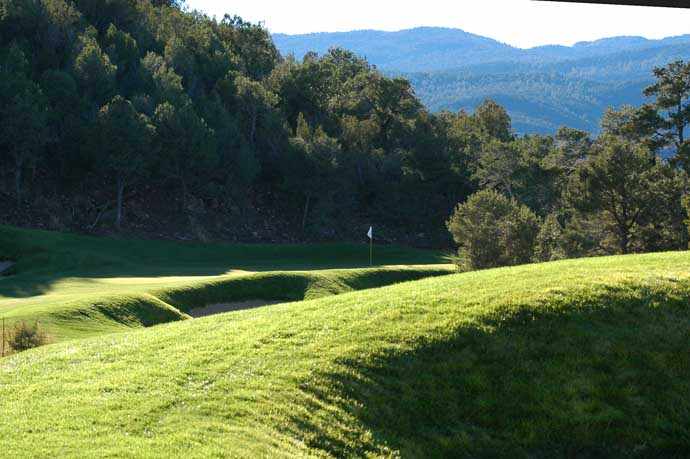 This High-Desert Gem Outside Albuquerque Beckons

When Alabama Golf News Online Editor Dan Vukelich, who lives in Albuquerque, told me about it and urged me to visit, I took his enthusiasm with a grain of salt. Everybody is keen to promote his or her favorite golf course, I thought.

But by the fifth hole of this high-desert gem just east of Albuquerque, I knew why Paako Ridge Golf Club has held a spot on Golf Digest’s “Top 100 You Can Play” list since it opened in 2000.

That’s a long time, by the way. So many courses open each year that the best new ones invariably force older courses down and, eventually, push some of them off the list. Paako Ridge, which is a Native American word for “Root of the Cottonwood,” still claims the No. 50 spot on that list, thanks to its design, spectacular views and immaculate conditioning.

Paako Ridge traverses rocky sub-alpine, pinon- and juniper-covered terrain that repeatedly rises and falls between 6,500 and 6,700 feet above sea level, which means your ball will fly about 10-12 percent farther than it does in Alabama.

One of Paako Ridge’s best attributes is its routing, which sometimes makes you feel you’re on the only golf hole in the world. In fact, while playing 14 of the 18 holes on this par-72 course, you can’t see any other holes, a rare gift that imparts a sense of focus and serenity.

In 2006, a third nine was added by Finger, Dye Spann to original design by Ken Dye, but to preserve the branding of the award-winning 18, the new nine was called, simply, No. 19-27. It comprises three par 3s, three par 4s, and three par 5s.No. 19-27 plays up and over a ridge to terrain that is more desert-like and open than the heavily forested landscape of the original 18.

Paako, as it’s known by locals, is not really walkable, thanks to its numerous elevation changes and a few vertigo-inducing tee boxes, but it can be done – if you’re as sure-footed as a mountain goat and, say, under 25. But whether you walk or ride, the views in all directions are spectacular.

Because of its mountain location in New Mexico’s high desert, Paako’s season is relatively short, running from April 1 to November 1. The best time to play is in September or October, when the mornings start crisp but warm quickly.

Depending on the tees selected, Paako can play from 5,886 to 7,562 yards. Again, depending on which of the five sets of tees you play, its course rating varies from 67.0 to 76.0, and its slope ranges from 132 to 148. When playing it for the first time, you’re well-advised to move up one or even two tees.

Paako is a shotmaker’s course. Positioning of the tee shot is determinative of whether you’ll have a chance at birdie. And because so many of the greens are multi-tiered, ending up on the wrong level means you’ll likely have to suck it up and lag downhill to salvage par or settle for a three-putt bogey.

Built by a local developer as the centerpiece of a high-end community, Paako Ridge came under new management in 2018. Its owners, a pair of golf-loving New York businessmen, changed its business model from that of a high-end daily-fee course to that of a bucket-list semi-private club with a focus on its members, whether they be local members of visiting national members why fly in to play it.

The result is that the number of daily tee times for non-members paying the $200-per-round greens fee is limited to no more than 50 percent. But considering the stratospheric prices changed by most of the other courses on the top-50 list, Paako is a steal.

The new owners greatly expanded its under-sized clubhouse, bar, and patio, and they turned its grille into a fine-dining restaurant that has its own aging locker for locally sourced beef. They plan on building a Bandon Dunes-style lodge and cottages in the next year or so but at the moment, though, the nearest lodging is some 20-25 minutes away in Albuquerque. Santa Fe and its hotels, museums and galleries are an hour north.

Paako can arrange transportation to and from the Albuquerque International Sunport, which is served by all major airlines with service from Birmingham, Nashville and Atlanta.

After your round, make a beeline for Paako’s patio and take in the panoramic views of the eastern flank of the Sandia Mountains towering in the distance another 4,000 feet above you. Then, once settled in with an adult beverage in front of you, replay in your mind’s eye every one of the 18 holes you just played – which you can do easily.

And that, my friend, is the mark of a truly great golf course.

Hmmm – golf in New Mexico at Paako Ridge. It’s worth the drive.

Featured image: No. 2 at Paako Ridge by Dan Vukelich