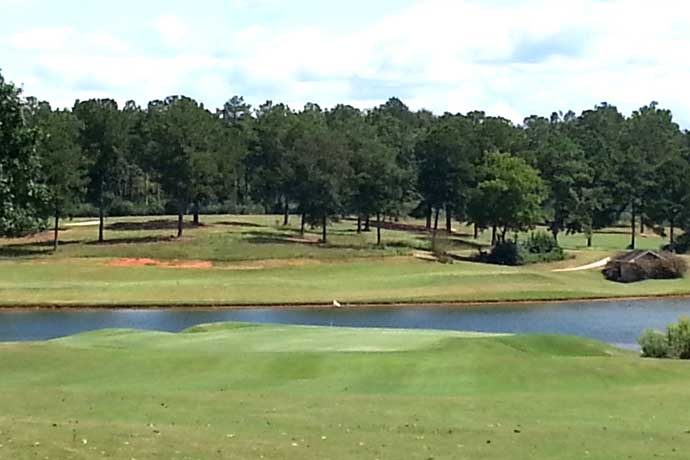 Approximately 750 trees were cleared and another irrigation line was added, according Ol’ Colony Director of Golf John Gray.

Much of the work was completed between March and June, with sod work finalized in August.

“We got it done in about 4 ½ months.” Gray said. “It’s definitely made a big difference.”

Ol’ Colony is home to the University of Alabama men’s and women’s golf teams and was designed by UA alum Jerry Pate. It features 18 holes with Bermuda grass fairways and greens. It opened in 2000.

Much of the cost of the renovations came from private funds and a grant, Gray said. The sod work was bid out,

While the additional irrigation line was much needed, the most important aspect of the improvements came from clearing trees around cart paths that were restricting air flow that made it difficult to grow grass.

Three holes that received much of the attention were Nos. 14-16.

“They are really narrow, so we took out two rows of trees,” he said. “It got more air flow through there. You can definitely tell it’s a huge difference. It doesn’t look like the same place.”

The 14th hole, a 549-yard par 5 from the tips, was a perfect example of why trees needed to be removed.

“We’ve always suffered from erosion issues,” Gray said. “On that hole, on both the right and left sides of the fairway, there was not a lot of grass. Now, it’s grass from tree line to cart path.”

The work was done in-house, but Pate was consulted beforehand.

“He came in and looked and marked a few of the trees we cut,” Gray said. He marked a few more that we haven’t cut. He talked about areas where we need to correct some things, like drainage and some other things. Jerry has always been real instrumental in this golf course.”

With a NCAA Men’s Regional golf tournament on tap for May 2022, Gray and his staff want to make sure Ol’ Colony is in pristine condition.

The golf course is open daily. It stretches to 7,079 yards from the championship tees.