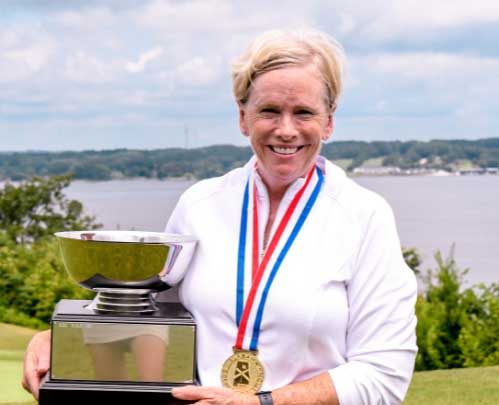 In the 36th edition of the championship, Hartwiger played the Cypress Bend course at 3-under-par 213 for 54 holes.

Hartwiger sat tied for second after round one but rounds of two-under 70 and one-under 71 pushed her to a four-shot victory.  Hartwiger’s final round was especially impressive. She shot the only under-par score in Wednesday’s final round.

The 10-time Alabama Women’s Amateur champion started with a pair of bogeys and one birdie on her opening nine, but her closing nine holes included some of her best golf of the week. Hartwiger rolled in two birdies on Nos. 11 and 15 for a bogey-free back nine.

Kim Keyer-Scott of Estero, Florida, Marilyn Hardy of Magnolia, Texas and Mina Hardin of Fort Worth, Texas tied as runners up after finishing at 1-over 217 total for the week.

Beatriz Arenas of Wellington, Florida claimed the title of Super Senior Champion in the Championship Division finishing with a 54-hole total of 14-over par 230. Tied for second were Jewell Malick of Heath, Texas and Taffy Brower of Boynton Beach, Florida, both posting 54-hole scores of 27-over par 243. Both Malick and Brower are past WSGA Super Senior Champions.

In the Tournament Division, Pam Posey of Bailey, Mississippi posted a 54-hole score of 11-over par 227, a total of five strokes ahead of runner up Maria Malone of Greensboro, North Carolina. In third place, Susan Miller of Loudon, Tennessee finished with a 54-hole score of 21-over par 237.

In the Tournament First Flight Division, Tracie Tolbert of Jackson, Mississippi posted a 54-hole score of 31-over par 247, a one stroke difference between runner-up Sherry Fox of Montgomery, Texas. In third place, Mary Payne of White Sulphur Springs, West Virginia finished with a 54-hole score of 34-over par 250.

Champion of the Tournament Second Division came down to a scorecard tie-break between Paula Moore of Star City, Arkansas and former WSGA president Donna Meyer of Houston, Texas – both posted a 54-hole score of 39-over par 255. With her final-round 18-hole score of 81, it was Moore who claimed the victory. In third place, Diane Dillard of Montgomery, Texas finished with a 54-hole score of 42-over par 258.

In the Tournament Third Flight Division, Kerinda Rutledge of Birmingham, Alabama posted a 54-hole score of 56-over par 272, a two stroke difference between runner-up Karen Jahimiak of Estero, Florida.

Harriet Cauthen of Orange Beach, Alabama, was named the Super Senior Champion in the Tournament Division, finishing with a 54-hole score of 48-over par 264. Runner up, Suzzette Kirchner of Tomball, Texas finished with a 63-over par 279.