Lee Hodges in the Hunt in Puerto Rico 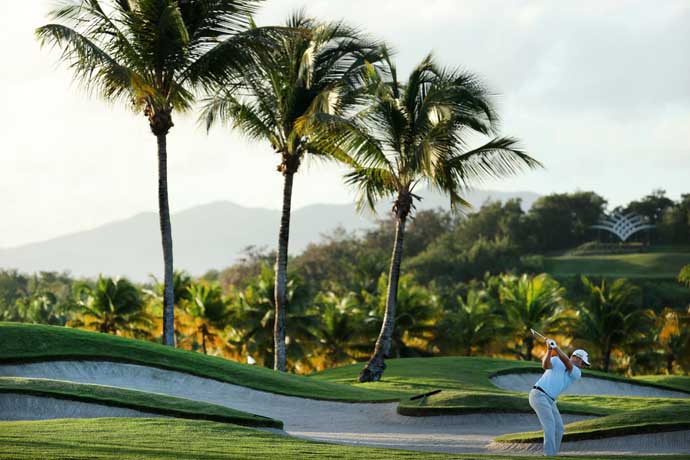 Hodges was tied for the tournament lead for several hours until Tour veteran Tommy Gainey, AKA Two Gloves Tommy when he first came on tour,  shot 65, surpassing a large group of players who also shot 66 in breezy conditions.

“I played well,” Hodges said after the round. “More than anything, I played smart. Never really left it in a bad spot at all, all day. Putted really well. Made a lot of good mid-range putts, I would say, and really just kept it in play.”

The 25-year-old Hodges said he felt good coming into the week in Puerto Rico after a solid finish last week in the Korn Ferry Tour opener in Sarasota, Florida. He entered the final round in that tournament three shots off the lead before eventually tying for seventh place.

Hodges, a 2014 Ardmore High School graduate, made four birdies and an eagle in the first round. He started on Grand Reserve’s back nine and made the turn in 2-under 34. His eagle came on No. 3 – his 12th hole. He capped the round with a 15-footer for birdie on the final hole.

Even though he’s off to a good start, Hodges isn’t getting ahead of himself. He said he will try to keep the same mindset going into the second round and beyond.

“Just play it the same way I did today,” he said. “Keep playing smart. I felt like last week on the Korn Ferry and Lakewood, for sure I didn’t play too smart, kind of hit it in some bad spots. But the last three rounds now, I guess, I have really been trying to play course management a little more, really miss in the right spot, and it’s really been paying off.”

“I mean, I would say top to bottom — obviously we’re not as strong as out here, but we can compete,” he said. “Any week, anybody from the Korn Ferry could win out here.”