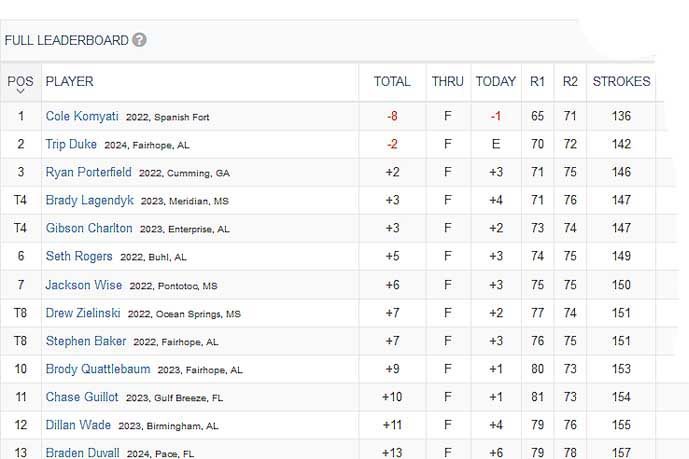 Next Southeastern Junior Golf Tour event is at Montgomery CC

In the 14-19 division, Spanish Fort’s Komyati took control in the first round with a 7-under 65. He entered the second round with a five-shot lead and finished off the win with a 71. His two-round total was 6-under-par 136.

There was a three-way tie for fifth place. Mobile’s Michael Crocker, Meridian, Mississippi’s Brady Lagendyk and Enterprise’s Gibson Charlton each finished at 147.

In the 12-13 boys age group, Mobile’s Fleming coasted to a 15-shot victory. Fleming opened with a 5-under 67 and then shot even par in the final round to finish at 5-under-par 139. Mobile’s Parker Crabtree finished second with rounds of 78-76 for a 154 total. Cannon Callaway of Hattiesburg, Mississippi shot 79-82 to finish third at 161.

Loxley’s Murray Waller was fourth at 169 and Fairhope’s Waylon White was fifth at 176.

The next SJGT tournament in Alabama is the SJGT Cup event at Montgomery Country Club Oct. 23-24.