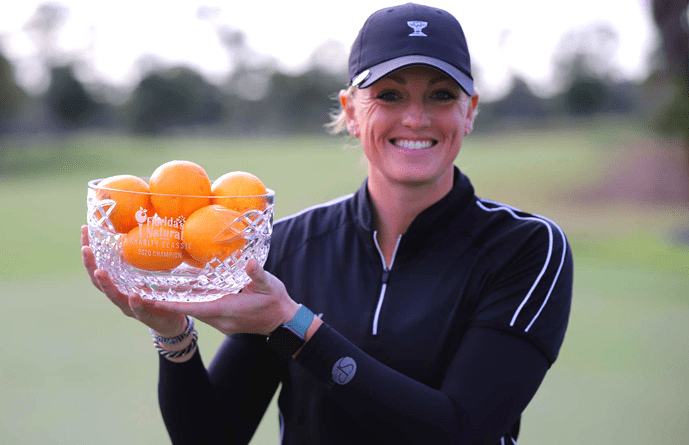 For Jackson, a Huntsville native, the win was her first in professional golf and came in dominating fashion. The 2016 University of Alabama graduate shot 68 in the final round to coast to an eight-shot win over Daniella Iacobelli.

Jackson, 26, took control of the tournament with a second-round 66 in windy, cold conditions at the Country Club of Winter Haven.

“I’m kind of speechless, don’t have many words right now,” Janie Jackson told Symetra Tour reps after the win. “That was a really, really tough week. I’m mentally drained, but super happy with my performance. I made some really big swing changes in the offseason, worked hard the last few months and hit is so consistent this week, so it was nice to see all the changes pay off. It feels really good, not sure it feels real yet, but it feels really good.”

Playing the Symetra Tour for a fifth season, Jackson’s win was worth $18,750 and put her over the $100,000 mark in career earnings. Jackson missed  qualifying the LPGA Tour by three spots last fall, but winning the Symetra Tour opener puts her on track to earn playing privileges next season.

Janie Jackson was a high school star at Huntsville High, winning three consecutive state Class 6A championships. She spent one year at the University of Arizona before transferring to the University of Alabama to close out her career.

Jackson said after shooting 66 in the second round that several swing changes made over the winter seemed to be paying off, although she had an inkling a win was on the horizon before the Symetra Tour opener.

“I texted my caddie [David Kelley] and said, ‘How do you feel about going and winning the first event next week,’” Jackson said. “Just felt like my game was in a good place. Conditions were not what I was expecting at all, but I’m super pleased with this.”