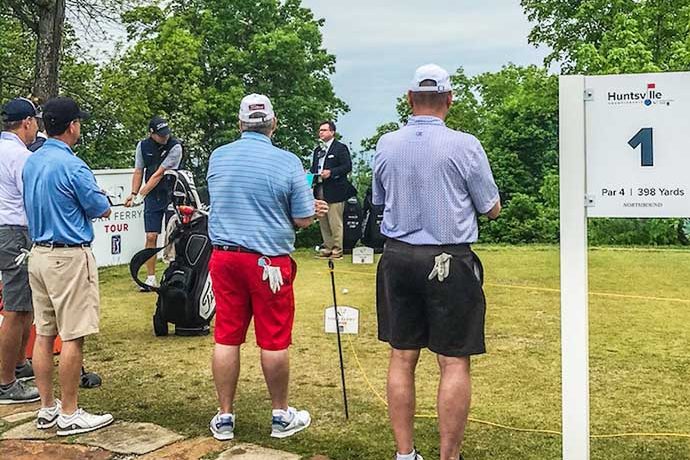 Pereira, Gutschewski – It’s All in a Day’s Work for Starter Matthew Schmitz

There was a familiar face on the first tee at The Ledges Wednesday, but he wasn’t teeing it up in the Huntsville Championship pro-am.

Instead, Ledges member Matthew Schmitz had a pairings’ sheet in his hand. And he dutifully announced the names of each Korn Ferry Tour pro and their amateur partners throughout the morning while serving as the tournament starter.

It’s not the first time Schmitz has done public announcing, though. During his student days at the University of North Alabama in the early 2000s, Schmitz did the PA at the school’s volleyball matches. It’s something he enjoys and still does for a variety of events.

“I started when I did volleyball matches for (coach) Matt Peck,” Schmitz recalled Wednesday afternoon. “I just kept going, I announced for the Globetrotters and when I got back to (Huntsville) I announced basketball and I do the state wrestling championships.”

Tournament director Penn Garvich and Ledges head professional Rob Clark approached Schmitz about being the starter for the Huntsville Championship. After Wednesday’s shift at the pro-am, Schmitz will be back on the first tee for the third and fourth rounds Saturday and Sunday.

Schmitz, who in the real world is the chief growth officer for MartinFederal, said announcing the players on the first tee is just another added touch that can separate the Huntsville Championship from other tour events. It also gives it a special feel.

“It made it big for those guys,” he said. “You could see the grins on their faces.”

Schmitz said his biggest fear is mispronouncing names. With that in mind, he got a list of players Tuesday night and practiced their names.

“The nice thing about the pro-am as opposed to a tournament round is you can ask the guys,” he said. “It’s very loose.”

He said the toughest name Wednesday was Mito Pereira, who is from Santiago, Chile.

“He kinda started poking at me, trying to get me to roll my ‘Rs.’ I took a shot at it, but I told him trying to speak Spanish with a Southern accent is not always a good thing. He got a chuckle from that.”

Scott Gutschewski was another tough one. “I said it about 10 times to him and he said, ‘You got it,’” Schmtz said.

“It was a nice touch and made it seem real for them. I think it will have a bigger effect for some of those guys when they come back on the weekend and they hear the pros get announced.”

Being a member of The Ledges, Schmitz said he is eager to see how the Korn Ferry Tour players score this week. He expects scores to be low and he won’t be disappointed if they do go deep. He’s not one of those guys who desires to see the course play like a U.S. Open.

“If they can figure the greens out – the greens are really the only defense the course has against that caliber of player – these guys are pros for a reason. They have a hot putter at times, and if they catch a hot putter, I can see the course record going down.”

Schmitz said Korn Ferry Tour pro Braden Thornberry, who once played a junior tour event at The Ledges, made a valid point.

“He said they pretty much get paid to figure out brand new greens every week,” Schmitz said.

Heath Slocum holds the course record with a 62.

“There are low numbers to be had out there,” Schmitz said.

Another reason Schmitz said to be on the lookout for the course record to fall was the scores shot at Monday qualifying. At Huntsville Country Club, three players who qualified shot 61, 62 and 63. A 64 got into a playoff. At Hampton Cove, a 63 and 65 got in, while 66 resulted in a seven-player playoff for two spots.

“And those guys don’t even have status on the Korn Ferry Tour,” Schmitz said.