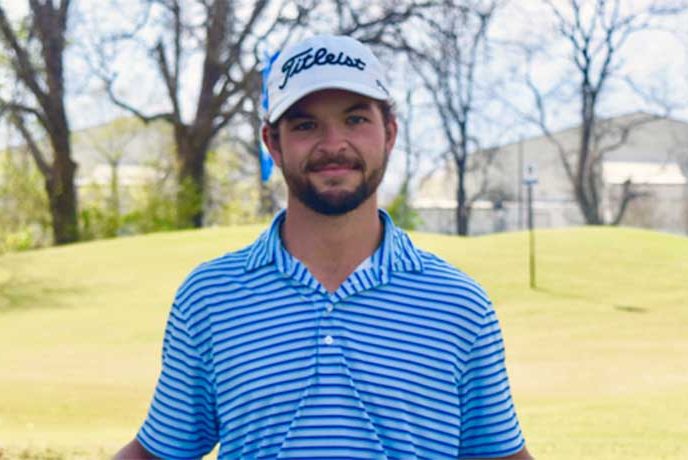 He Survived a Seven-man playoff at Monday’s Qualifier

It took a long wait and four extra holes Monday, but former University of North Alabama golfer Conner Godsey made it through a seven-man playoff to earn a berth in this week’s Huntsville Championship.

Godsey played his qualifying round at the Robert Trent Jones Golf Trail’s Hampton Cove facility, one of two qualifying sites. Huntsville Country Club hosted the other.

Godsey, a native of Rogersville who now makes his home in Jacksonville Beach, Florida, fired a crisp 6-under-par 66 on the Highlands course and then had to wait to see if that would get him through to the tournament. On a day when perfect weather greeted players, scores went low.

Texan Cyril Bouniol set the pace with a 9-under 63 and Carson Young of South Carolina shot 7-under 65 to secure two of the four berths. Seven players tied at 6-under 66 and went to a playoff to determine the final two qualifying spots.

Godsey survived the first two holes with pars. Three players, including Godsey, reached the par 5 17th hole in two. After leaving his eagle putt short, Godsey stayed alive by making a testy short putt to match two others with a birdie.

On No. 18, the fourth playoff hole, Godsey hit a wedge to about eight feet and watched his birdie putt do a 360-degree circle around the hole and drop to secure his spot in the 156-man field. The tournament will be played at The Ledges.

A total of 97 players were trying for four spots at Hampton Cove.

It’s not his first time to play in a Korn Ferry Tour event. He played the tour full-time in 2018 and even held a 54-hole lead at one event before finishing tied for 13th. He’s also played on the PGA Tour LatinoAmerica.

At Huntsville Country Club, four spots were available for 99 players. Sahith Theegala set the pace with a 10-under 61, while Thomas Bass of North Carolina was second with a 62. Joseph Winslow of Kansas was third with a 63, and Jacob Bergeron of Louisiana won a four-man playoff to get the final qualifying spot. Among the players Bergeron beat in the playoff was Huntsville amateur Nick Dunlap, one of the top junior amateurs in the country.

Godsey will join Lee Hodges, who played high school golf at Ardmore and is No. 6 on the Korn Ferry Tour points list, in the field.

Daily tickets are $11.75 per day or $33.25 for the week. Juniors under 16, military, First Responders and health care workers are free. For information, go to huntsvillechampionship.com.