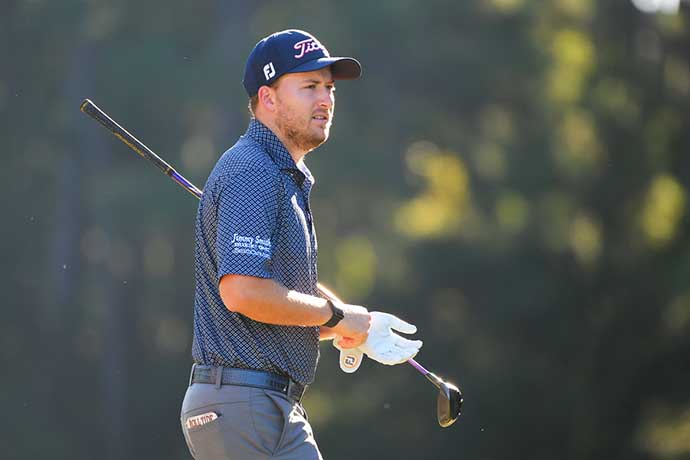 Mickey Wolfe hadn’t been at Canebrake Club very long, but he knew there was a kid by the name of Lee Hodges who was a special talent, just from the sound the ball made against the clubface.

“I’ll never forget seeing this little skinny kid up there,” Canebrake’s director of golf said Monday. “I didn’t know who he was but I remember thinking his golf ball sounds different, even at that age.”

That kid was from a tiny Alabama-Tennessee border town called Ardmore. This week, that kid is back home, so to speak, playing in the Korn Ferry Tour’s Huntsville Championship at The Ledges.

Hodges began his college career at UAB and finished it at Alabama. He turned professional in 2018 and already has one win on his resume at last year’s WinCo Foods Portland Open. He’s riding a streak of 18 consecutive cuts made. He’s sixth on the Korn Ferry Tour points list and well on his way to earning PGA Tour status for the upcoming season.

He would have been on the big tour this year except the Covid-19 pandemic put everything on hold. So, he simply has gone about his business of racking up top-10 finishes while he waits his turn to move up.

“It’s pretty crazy,” he said of his rise in professional golf. “I’ve been blessed. It’s taken a lot of hard work and I have been put in a lot of good positions in my life. I am very thankful for that.”

Wolfe can attest to Hodges’ work ethic, having seen him practice hours on end at Canebrake’s practice facility.

“As I got to know him and play a lot of golf within him, what stood out was just how hard he worked,” Wolfe said. “That’s probably the difference. He knew exactly what he wanted to do, even at that age.”

Wolfe also knows that Hodges’ support system has given him an opportunity to succeed.

“His fiancée (Savannah Kennedy) just wants him to play golf, so that helps when he is out there on the road and she is at home and him knowing she’s OK with what he is doing,” Wolfe said. “Lee’s attitude sets him apart. He’s not a kid who is out there running around chasing a good time. He is playing golf, eating dinner and going to bed. Him knowing exactly what his goal is – to get on the big tour – has always been his thought process. He wasn’t going to let any kind of stupid decision get in the way of that.”

John South was Ardmore High School’s golf coach when Hodges was starting out. He recalls a skinny kid who loved the game.

“I saw his dedication in seventh grade,” South recalled. “His daddy would drop him at Canebrake when he went to work and pick him up when he got off work. That’s what Lee wanted. At the time Lee was really small. As he started to grow, you could see his game develop.”

Turning from Baseball to Golf

In a 2020 podcast, Hodges admitted that if he had been bigger, he probably would have gravitated to baseball instead of golf. But baseball became a thing of the past when Hodges fell in love with golf.

“I’ve never seen any person at that age with the work ethic he had,” South said. “A lot of kids in high school go out and at practice they are having fun, goofing off. That was never Lee. He went to practice with a purpose, and that purpose was to get better.”

That dedication paid off in 2014 when he won the AHSAA Class 4A individual title.

Hodges admits that there was one aspect of his high school career in which he didn’t shine – academics. South recalled once when Hodges was in sixth grade, he wasn’t paying enough attention to his grades.

“I remember one time when he was in sixth grade, a teacher who was kin to him told me Lee wasn’t doing up to par in class and asked if I would go talk to him,” South said. “I told Lee that he was fixin’ to be in the seventh grade and that if he wanted to play sports, academics have to come first because if you don’t make your grades you can’t play. I hadn’t seen him play golf at that point, but he started doing his work. I still jab at him about that.”

“From an early age I knew that I didn’t want to do anything that my degree was going to get me,” Hodges said on his way to The Ledges. “I was never a great student and I’m sure my mom and dad can attest to that. I gave them a lot of headaches over the years with my grades. I’m smart, I just didn’t put much effort toward it – which I should have.”

After three years at UAB, Lee Hodges transferred to Alabama where he finished his college career. He said turning pro didn’t really hit his radar until he got to college.

“I thought it would be cool,” he said. “But I never thought about it like that in high school. My freshman year at UAB, I thought I’m not bad at this. I won a couple of honors from Conference-USA and that’s kind of when I decided to keep working at it and see what happens.”

The hard work obviously has paid off. And, he’s giving back too. Hodges donated a golf simulator to Ardmore High School and in June he’s hosting a Southeastern Junior Golf Tour event at Canebrake.

He’s also about to marry his high school sweetheart on June 19 in Franklin, Tennessee. After that, Lee Hodges will join the PGA Tour next year as he takes his game to the ultimate level in golf.