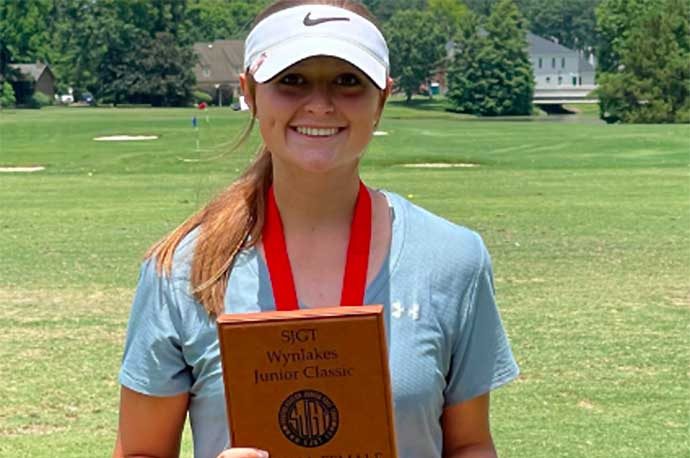 The tournament was part of the Southeastern Junior Golf Tour, which conducts junior tournament across the region.

Foster finished the two-day event with at 7-over-par 151 to take the 15-19 division and the overall female championship. Foster, a rising sophomore, shot 77-74 to win by three shots over Evelyn Tankersley of Montgomery, who was 10-over in the 36-hole tournament and won the 12-14 female division. Hoover’s Reagan Waggoner was second in the 15-19 division, shooting 157. Montgomery’s Virginia Anne Holmes was third in 15-19 division at 161.

Poppell shot 70 in the final round and finished at 2-under 142 to win both the overall male and 16-19 male divisions by four shots over Andrew Korytoski of Cataula, Georgia and Elad Sebbag of Birmingham, both of whom finished at 2-over 146. Korytoski earned a second-place finish in a scorecard playoff in the 16-19 division.

Birmingham’s Ryan Pugh beat Fairhope’s Michael Heaton on the first playoff hole to win the 12-13 Male division. Both players finished the tournament tied at 152. Ves Butler of Athens, Georgia was third at 153.

Tankersley finished at 154 to win the Female 12-14 division. Lauryn Olivia Leonard of Pike Road was a distant second at 43-over.

For complete results, go to www.sjgt.com

The U.S. Junior Amateur will be played at the Country Club of North Carolina in the Village of Pinehurst July 19-24.

PrevPrevious ArticleRumbling Bald: Cool Down in the Mountains of the Carolinas
Next ArticleDry Glove Anti-sweat Lotion Works in Field TestNext