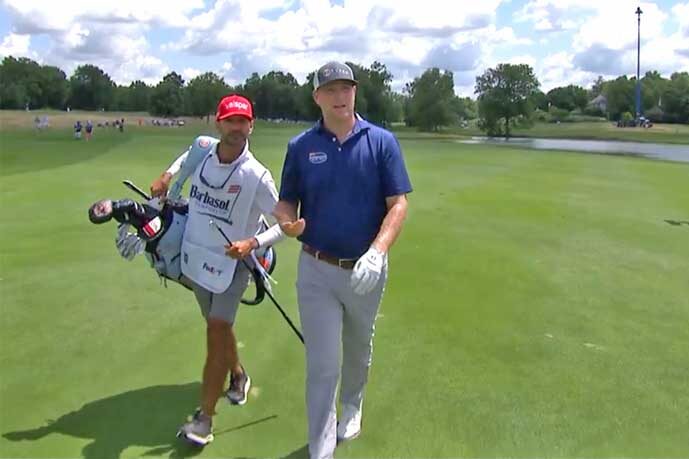 Grinding win gets Trey Mullinax back to golf's top tier

The last big-time fist pump from Trey Mullinax came way back in 2014 when he was playing for the University of Alabama men’s golf team and he knocked in the putt that clinched the Tide’s most recent national golf championship.

With his family and friends looking on Sunday afternoon, Trey Mullinax gave two giant fist pumps on the 18th hole when his birdie putt dropped for a one-shot lead over Kevin Streelman at the Barbasol Championship in Nicholasville, Kentucky.

When Streelman’s putt to tie slid by on the right side of the hole, the 30-year-old Mullinax had his first PGA Tour victory in his 106th start and a berth in this week’s Open Championship at St. Andrews.

Mullinax shot 66 in the final round and finished at 25-under 263, one shot off the tournament record in a week that say numerous rain delays.

The victory also marked the culmination of a long road back from a devastating concussion Mullinax, a Birmingham native, sustained in 2019 when playing in a pro-am his partner’s shot hit him in the back of the head at the Charles Schwab Challenge. He was initially diagnosed with a mild concussion, but continued to play and practice despite suffering from headaches and blurred vision.

Ironically, it was at the Barbasol Championship several weeks later when things came to a head and he sought another medical opinion. According to a 2020 Golfweek story, Mullinax was diagnosed with convergence insufficiency, a condition in which your eyes are unable to focus on nearby objects and can lead to blurriness, headaches and an inability to concentrate.

His condition had worsened over time – had Mullinax taken time off initially he likely would have recovered quickly. Instead, after getting a second opinion he spent six weeks doing mostly nothing.

Before the injury, Mullinax had made 14 of 16 cuts. After, he missed six straight cuts. He eventually lost his card and spent time on the Korn Ferry Tour before regaining his Tour status for the 2021-22 season.

On Sunday, he admitted going through a “pretty dark period” during his recovery.

“It was tough,” he said in his post-victory remarks. “Obviously that guy, he didn’t mean to hit me. It was kind of a freak accident, took me out for a little while, worked really hard to get back. You go from having PGA Tour status to getting injured to not playing great to nothing, and then COVID hit and then got nothing for even longer.”

Sunday’s win is life-altering for the former Crimson Tide standout who was a teammate of Justin Thomas. Not only did he get into the Open Championship, but he became fully exempt through 2024 on the PGA Tour and DP World Tour. He also earned exemptions into the Sentry Tournament of Champions, The Players Championship, the PGA Championship and multiple invitational events in 2023.

He cashed a check for $666,000 and moved to 71st on the FedEx Cup points list. Before the win, his previous best finish this season was a tie for fourth place at the Sanderson Farms Championship in Mississippi.

“What a week,” Mullinax said. “Tired. It was a long day today, it was a grind. But we stayed sharp, we stayed focused pretty much all day. We knew it was going to be a grind, we knew we were going to get wore down, but we had to just keep at it, keep firing and at the end of the day I walked away with the low score.”

Although the Barbasol Championship was a parallel event to the Scottish Open and most of the Tour’s top players were playing there, Mullinax said the win was just as satisfying.

“I don’t know any second-tier players out there,” he said. “This is a great event. Everybody playing in this event is an amazing golfer and they’re on the PGA Tour. And yeah, you might not be at the Scottish, but you’re playing against the best golfers. That never changed in my mind. I’m playing against the best and I want to win, so it was great to go out and do that.”